Skip to content
There is a good chance that this election serves America best by letting us recognize that the system we have claimed as the best democracy on the planet is little more than a sham. The fact that we are given only two choices that most of us despise must make us realize that the system is not working for us as well as we may have thought. After 240 years of building ourselves up as the best country on the planet, it is time that we more fully address what it means to be a democracy and how we can implement the changes to our governments and systems of organization that will allow us to say we are the best version of democracy on the planet and truly mean it. 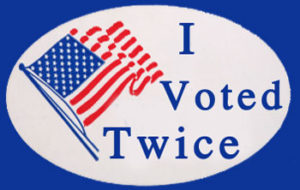 For a number of years, Americans have toyed with the idea of instant runoff voting (also called ranked choice voting). However, since the major choices made in America are reserved for only .00017% of the population, and the entirety of that percentage are embedded within the two parties which currently hold power, there has been no passionate fervor for integrating this much better, wiser, more functional way running a democracy because those parties fear losing their power. While America has 28 qualified ballot certified political parties and 214 state-level political parties, we are still largely confined to voting for two candidates whom only 9% of the population bothered to vote for in the first place.
Fortunately, this year Maine is integrating instant runoff voting into their gubernatorial election, hopefully leading the way for the rest of America to embrace a better way of being as well. The unfortunate reality is that both the Democratic and Republican parties have economic myopia, seeking profits for corporations before providing for the needs of the people that truly comprise this country of ours. If Americans can guide their local governments to integrate instant runoff voting into their elections to allow for a truer voice in their community to make the decisions that truly effect the quality of life for the people we look in the eyes everyday and the places we live, the federal government may eventually follow in those footsteps, allowing us to truly have a government of, by, and for the people again. Although the outcome could possibly bring dire consequences either way it turns out, our current presidential election has proven that America’s political process has become little more than media hype, which distracts us from more important considerations that have a greater effect on our daily lives, and how we become the country and the people we truly want to be. If you truly wish to be a participating member of a Democratic community, please pay greater attention to your local elections, and as we move forward into becoming a truly working democracy, let us continue to embrace progress, and be as bold and brave as our forefathers were when they established the foundations for us to have the freedoms we have and constitutions which can be wisely amended.
While this election season may very well be the biggest political debacle in the history of America, it gives us great opportunity to look at ourselves honestly and openly so that we may bravely make the changes that need to be made in the coming years. Considering the representatives we have selected, it is time that we take a deeper look into who we are as a people and where we wish to go from here. If America is to ever truly be free, we must release ourselves from this ridiculous two party system and the limitations it imposes upon us by serving only the wealthy and leaving the rest to fight and bicker over nonsense and insanity.

Here is a short video on the benefits of instant runoff/ranked choice voting.

Here is a video on how instant runoff/ranked choice voting works.

Do you think America has what it takes to embrace instant runoff/ranked choice voting, or do we need to continue on with the “the alternate domination of one faction over another, sharpened by the spirit of revenge” that George Washington was concerned about when he spoke out against the two party system?