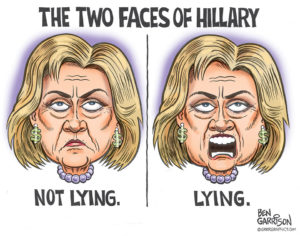 On the other side of our coin, in order to keep our status quo intact, we are given the ability to elect our first female president, and while this gives us reason to consider ourselves moderately evolved and enlightened, this particular female is one of the most distrusted and despised candidates we’ve ever loved. Since her stint as first lady, Mrs. Clinton, has jumped headlong into the embracing the military industrial complex that has infested our government, and has overwhelmingly embraced the financial interests that support and feed from it. Although she is the most qualified candidate, some are wondering if either of these two choices qualify America to be the world leader it is.

If you want to vote for Mrs. Clinton, you may also be voting against Mr. Trump, as many people are deciding to vote for her not based upon her qualifications, or her ability to lead America, but because she is simply not a megalomaniacal, misogynistic reality television star. Unfortunately, a vote for Clinton as an anti-Trump protest means that you also have to accept the continued proliferation of fracking, Citizens United, offshore drilling, drone bombing, the Trans Pacific Partnership, big oil, big coal, big pharma, the fact that she’s a big liar, and the fact that she supports all of the other fiduciary interests that most of us hate about America. In other words, as great as it is that Hillary is a woman, she’s the most embedded candidate with the entities that are destroying the “America” we love.

Authors correction: Since I do want to be impeccable with my word, I did enough research to realize I was wrong about some of those statements. As it turns out, she’s sort of against fracking, says she will introduce a constiutional amendment to overturn Citizens United, has a lot of ties to the oil and gas industry, rarely turns down a good drone strike, is back and forth on the Trans Pacific Partnership, and has received more contributions from big pharma than any other candidate in the election. At the end of it all though, I’m still not a big fan.

Many are threatening to vote for one of the two candidates that represent the “third party” option. It’s interesting that we actually have dozens of “third” parties, nevertheless, the bitter pill we have to swallow is that the United States of America is, and always has been, a two party system. A vote for any one of these third party candidates in a two party election is nothing more than a protest few will ever hear.

I’m sure that Jill Stein is a wonderful woman, and Gary Johnson probably has some redeeming qualities I have not noticed yet, but in America’s two party system, neither of them has a snowball’s chance in hell of winning the election of president of the United States of America. George Washington feared a two party system would “enfeeble public administration” through “the alternate domination of one faction over another, sharpened by the spirit of revenge, natural to party dissension, which in different ages and countries has perpetrated the most horrid enormities… itself a frightful despotism.” Unfortunately, Washington’s fears have come to light, and in our current system, we only have a choice between Clinton and Trump.

Whether or not America can evolve to adopt a system which allows more than these two corporate owned parties is something only future generations may be able to answer. Unfortunately, for now, we can either choose an embedded multi-millionaire with questionable ethics or a billionaire with no ethics. Welcome to the greatest version of democracy that humanity has so far developed. Hopefully, we’ll expand upon our system within the next four years.