This will be my last blog on the 2016 Presidential Election. I’ve tried to break down my thoughts about it throughout the week, but it’s gotten all the attention I care to give it. Next week, I think I’ll be addressing some issues of greater importance.

I stand by what I said at the beginning of the week, and most of what I’ve said throughout. However, I do need to correct some of the things I said about Hillary Clinton on Wednesday. I said supporting her meant that we had to accept the continued proliferation of fracking, Citizens United, offshore drilling, drone bombing, the Trans Pacific Partnership, big oil, big coal, big pharma, the fact that she’s a big liar, and the fact that she supports all of the other fiduciary interests that most of us hate about America. In other words, as great as it is that Hillary is a woman, she’s the most embedded candidate with the entities that are destroying the “America” we love. I had a friend tell me I needed to cite my research (which I hadn’t really done), but I just coughed it up to opinion.

Since I do want to be impeccable with my word, I did enough research to realize I was wrong about some of those statements. As it turns out, she’s sort of against fracking, says she will introduce a constiutional amendment to overturn Citizens United, has a lot of ties to the oil and gas industry, rarely turns down a good drone strike, is back and forth on the Trans Pacific Partnership, and has received more contributions from big pharma than any other candidate in the election. At the end of it all though, I’m still not a big fan.

I’ve also since watched an interview with Jill Stein, and found a lot of her ideas wavering from well grounded to largely idealistic. However, while I am impressed that she actually has a plan to address climate change, unemployment, and poverty in one fell swoop, I am not convinced that she would actually make a good president. Nevertheless, I’m glad she’s actually talking about things that matter, unlike the two unfortunate, “actual” candidates. 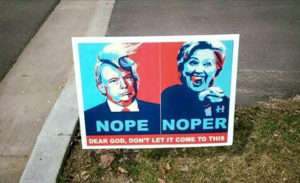 As I said, this two party version of democracy has little to do with the people of America, and if I really vote my conscience, I will most likely either write in Bernie Sanders or abstain from that particular election and focus my attention on local races that have greater effect on my life. Hillary is the better candidate, but I’m not sure if an even keeled status quo is really in our best interest.

I realize there are some who say not voting, or voting for a third party in protest, is a vote for Donald Trump, but that I am backed into such a corner only give me more cause to not participate. I no longer have any faith in the federal government, and I do not support it. I recognize that makes me unpatriotic, but I care more for the people of this country than the government which so abysmally meets their needs by catering to the desires of the financial elite.

Based upon how America actually operates, Donald Trump is actually the honest choice. By enabling the current paradigm, we continue to exhort the wealthy, allowing them to grab us wherever they want. A Trump presidency would be incredibly unfortunate, and I believe that if he runs it like he runs his businesses, chances are very good that he will be the last elected American president.

According to most of the polls, Clinton is currently leading Trump by 2-9%, depending on which poll you listen to, Gary Johnson has 6% of America’s support, and Jill Stein has about 2%.

I am renewing my passport. Good luck, America.