My parents took me to see “Elvis Lives” at the Van Wezel the other night, and it got me thinking about my own ambitions. The show features three different Elvises representing the three decades of his professional life, from when he was the hip-shaking sensation that could only be filmed from the waist up in the Fifties, to the more mellow Elvis who more or less ran in place toward the end of the Sixties, to the Elvis who pretty much shook one leg in the Seventies. Although my career path is nowhere near Elvis’, I’ve always looked up to him as the cultural juggernaut that he was, and I have to wonder what it was that made him so special.

Obviously, he had natural talent, and his voice contributed largely to his appeal throughout the decades. Although he worked it into his contracts to get writer credits when he performed other people’s songs in his own signature fashion, there were very few from his repertoire that he actually penned himself. Yet the way he performed those songs was unlike anything anyone had ever seen before, so it could be argued that it was ultimately Elvis’ individuality that made him who he was. 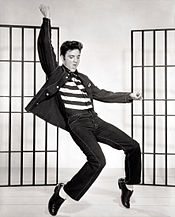 Personally, I’ve managed to become a fairly unique individual myself. Most people who know me will say that they don’t know anyone else quite like me. Like Elvis, who was known to have some ego issues from time to time, the life I’ve carved out for myself was developed through a measured blend of shaping the character of my ego and it shaping the characters I play.

From what I have seen of the people who have been successful in life – in the deepest sense of emotional, mental, physical, and spiritual balance and happiness – they seem to have found the sweet spot between pride and humility, selfishness and selflessness. Amid all of the clatter in modern life, and all of the the calls that are made by those who call for our time, talents, and treasures, it would seem that one of our key goals is to find that sweet spot, the other being to help others find it as well. It is up to each of us, as representatives of the mobile, liquid-fueled, collections of stardust we get to individually move around the planet, to channel the power of whatever life force is moving through us to living the best lives we possibly can by helping others do the same.

I am proud to say that I have live quite a few of my moments in that sweet spot, and I have had the great fortune of being able to inspire others to often find it as well. Yet, I have to humbly admit that I am very prone to selfishness, and when I’m not directing my earth suit toward purposeful action, I have often caved in to the pit of apathy and let my stardust grow lethargic. And though we may have completely different styles and life paths, that seems to be what Elvis was dealing with about the time I first came into this world.

It’s not that I’m trying to take up him mantle, and it’s not really that I want little old ladies to have a collection of gold-trimmed plates with my picture on them, but I want to be as impactful as Elvis. Even if it was only as a step in accepting human sexuality, Elvis changed the world, and ultimately, I think it was for the better. If I must have a big picture goal for my incarnation as this blue-eyed caucasian with a penchant for writing and painted guitars, it’s to be bigger than Elvis and make a helpful impact in the world.