Although I have made disparaging remarks about Mr. Trump in the past, and based on his activity so far, there’s a very good chance I will again in the future, I am empathetic with his plight. He does, after all, suffer a grand disability, and I’m not talking about the Narcisistic Personality Disorder.

His disability is that he has not experienced the fullness of human life. As a child born into the world of the wealthy, he has been raised in such privilege that he has never know much of what the rest of us have known. He has never had to go without, never had to worry about not having enough, and never had to sacrifice the way that normal people do.

Of course, the same could be said of his cabinet. The few people he’s picked so far have a net worth of 14 million dollars already, and he’s still got more seats to fill. Although not all of them were born into wealth, it’s probably not an alternative fact to say that they’re out of touch with the reality the rest of us experience.

While it could be said that they could learn to empathize with us through film, theatre, and other expressive art forms, they are as likely to fully understand the reality we face as we are of understanding Indians by watching Slumdog Millionaire.

Although this is an appropriate group to operate an oligarchy, which the US government actually is according to Professors Gilens and Page (of Princeton and Northwestern respectively) in their study, “Testing Theories of American Politics: Elites, Interest Groups, and Average Citizens,” it may not bode well for the democracy most Americans still believe we have.

Fortunately, due to the current state of our technology, we are now, for the first time in history, capable of actually establishing a democracy. The movement we are now capable of creating could not only overpower the oligarchy we’re facing, but even improve upon the democratic republic we’ve been settling for these last couple of centuries. Yet to do this, we will also need to look at our own disabilities.

Trump’s impairment is that he has a limited understanding of the world, and that is very similar to how we have all been hobbled in our understanding of politics. Since we’ve limited ourselves to two parties, we have lived out President John Adams’ fear when he said, “There is nothing which I dread so much as a division of the republic into two great parties, each arranged under its leader, and concerting measures in opposition to each other. This, in my humble apprehension, is to be dreaded as the greatest political evil under our Constitution.”

This last election, possibly more than any in American history, has proven the inefficiency, ineffectiveness, divisive, and downright ridiculousness of the two party system, pitting every American against one another, supporting leaders most of us don’t even believe in. If we want a country of, by, and for the people, we are going to have to see beyond the limitations that have been established for us, and work outside the parameters that have been set.

The Democratic and Republican parties are merely corporations. Let us begin to see one another as people who are more than clusters of imbalanced ideologies. Let us be a people who can show our civil servants how to reach across party lines and reach accords of law, labor, citizenship, and community.

If we really want to be Americans, we have to give greater consideration to what that means, lest we continue to watch the pendulum swing as these two parties cut through the heart of democracy. May we all overcome our limitations and see one another as we truly are. Perhaps, if we can transcend our own shortcomings, we can teach our government officials to do the same. 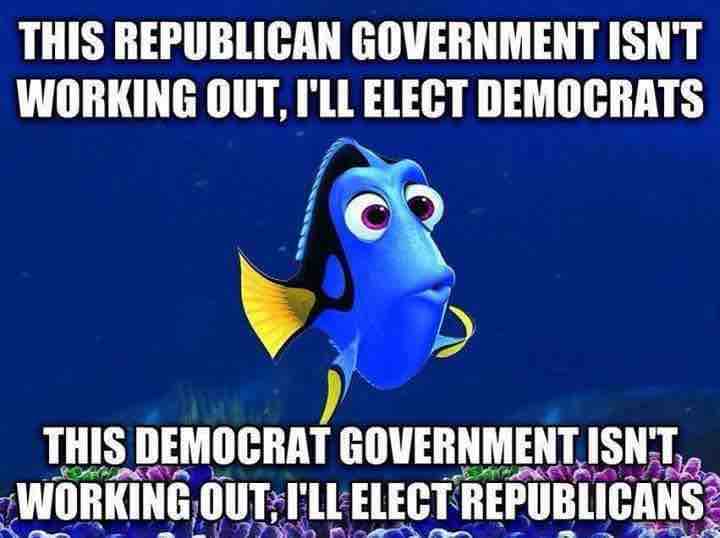