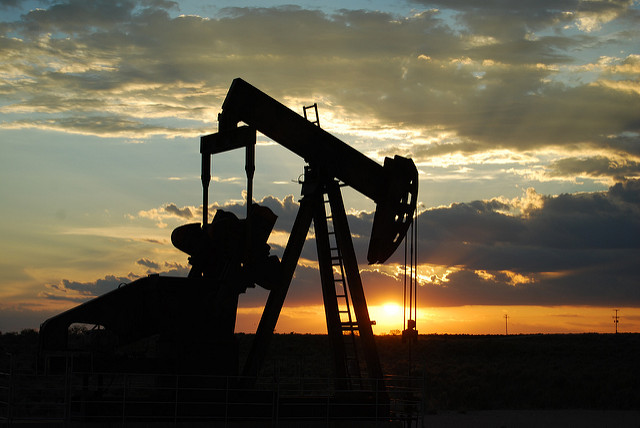 Of course, the cannabis conspiracy wasn’t the first time the oil industry was involved in such shenanigans, nor would it be the last. “Oil was first widely used around 1850 in Romania,” Thom Hartmann writes in The Last Hours of Ancient Sunlight. “The real boom began, however, in 1859, when oil was discovered in Titusville, Pennsylvania, in the United States. At that time, the world’s population numbered just over one billion people, and the human race was fed both by the current sunlight falling on croplands and their animals’ feed crops, and by a substantial amount of ancient sunlight that they dug up by burning coal taken from the Earth in Europe, Asia, and North America.”

When oil companies got their starts, they were largely in the business of kerosene, which was mostly good for lighting and heating. However, the volatility of kerosene had its risks, and as houses were burning down around the country, John D. Rockefeller developed a way to refine oil in a more standardized way. Rockefeller’s innovation revolutionized kerosene, and enabled Standard Oil to monopolize the market, making thirty-three year old John D. Rockefeller one of the most powerful people in the world. Although the Supreme Court would cite the Sherman Antitrust Act of 1890 as the reason for dismantling Standard Oil in 1911, Rockefeller was still a stockholder in each of the thirty-three new companies, and the richest man in America.

Rockefeller’s noted ruthlessness was extremely indicative of the early masters of capitalism, and his methods, often viewed as unethical, were mirrored in Cornelius Vanderbilt’s intimidation tactics as he came to rule over the railroad industry. Although these methods put many others out of business through their “winner take all” monopolism, it still aligned with the value of self interest at the heart of capitalism, and their industries continued to prosper. On January 10, 1901, when the Hamil Brothers struck oil in what was considered to be barren Texas land, the United States skyrocketed to the top of the oil industry, and capitalism would never be the same.

Since oil could also be used to make synthetic fabrics like rayon, and would soon come to make nylon and polyester as well, Americans didn’t have as great a need for wool or cotton, and eventually converted the land to pastures for beef and fields to grow their food.

“The massive leap in our food supply that began just after the Civil War caused our planet’s population to go from just over one billion humans around the time of the discovery of oil to two billion in 1930,” Hartmann continues. “By then, we were beginning to use farm machinery extensively, and the use of oil as a means to increase agricultural production – from running tractors to converting oil into fertilizers to manufacturing pesticides – caused our food production to explode. While it had taken us 200,000 years to produce our first billion people, and 130 years to produce our second billion, the third took just 30 years.”

Over the course of the last century, petroleum has become America’s go-to industry, as we have come to rely on it for everything from fuels and tools to foods and fabrics. As is evidenced by our accepted practice of creating “disposable” diapers out of a material that will not decompose for half a millennium, we have become addicted to it beyond common sense. Although the majority of the scientific community speaks to its effect on climate change and the fact that we are running out of oil, we’ve shown little initiative to replace it with anything better.

As a matter of fact, the American infrastructure was largely designed with oil in mind, along with the industries of cement, rubber, automobiles, insurance, trucking, chemicals, and construction industries that comprised the “Road Gang”. This crew of capitalists bought up and dismantled America’s public transit system in order to get people buying cars before ushering in the National Interstate and Defense Highways Act of 1956. Unfortunately, the plot device of Who Framed Roger Rabbit?, where the villain buys up the Cloverleaf trolley in order to build a freeway, was based on true events.

“During the greatest period of American highway construction,” writes Jeff Speck in Walkable City: How Downtown Can Save America, One Step At A Time, “General Motors was the largest private company in the world, and the secretary of defense was Charles Erwin Wilson, the former GM chief who had famously shared his belief that ‘what was good for the country was good for General Motors and vice versa.’”

Unfortunately, more consideration was given to how to increase profits than to increase quality of life, and ever since, Americans have come to resolutely embrace relying on having their own car so that every day, millions of Americans find themselves completely alone in traffic, addicted to the fossil fuel it takes for them to participate in society.

“The oil industry is much more dependent on government handouts than is generally realized,” states Lester Brown in The Great Transition: Shifting from Fossil Fuels to Solar and Wind Energy. “In 2013, governments worldwide subsidized the fossil fuel industry with over $600 billion, giving this aging industry over five times the $120 billion that went to renewables. About half of the fossil fuel subsidies went to boost oil consumption. In effect, taxpayers’ money is being used to subsidize climate change.”

One of the main problems with companies that make their money off of mining and drilling for natural resources is the assumption that they actually own the resources. Building on the noble idea of real estate that had been growing for years, as these companies acquired the land, they assumed the rights to whatever lies beneath as well. Leaning on the sanctity of this methodology, oil companies have spent the greater part of the last century sucking a shared resource from the ground and selling it back to us to build an empire in which the top five oil companies, all in the Fortune 500’s top ten list, reportedly reaped profits of 375 million dollars a day in 2011, according to Think Progress. As much as one might want to embrace the merits of capitalism and honor the opportunities it may grant to entrepreneurs with gumption, when we have companies raking in 261,000$ a minute, and not helping replenish the land they decimate, Adam Smith himself would probably rethink his theories on the benefits of self interest.

Yet, there are initiatives in the works to help us overcome this addiction. After low cost electric cars were killed in the Nineties due to their inability to contribute to the economy of endless consumption, the 34,000$ 1996 General Motors EV1 still planted the seeds for the 109,000$ 2008 Tesla Roadster, appeasing the gods of capitalism to grant a resurrection of the electric car. Of course, because the majority of the country still generates electricity through coal or nuclear power, respectively great perpetrators of pollution we cannot escape and waste that we cannot dispose of, it seems to be more of a limping diagonal move than a huge step forward.

However, Lester Brown promises that things are looking up. “The worldwide transition from fossil fuels to renewable sources of energy is under way. As fossil fuel resources shrink, as air pollution worsens, and as concerns about climate instability cast a shadow over the future of coal, oil, and natural gas, a new world energy economy is emerging. The old economy, fueled largely by coal and oil, is being replaced with one powered by solar and wind energy. We can now see this new economy starting to take shape. We saw it in 2016, when Denmark generated thirty-four percent of its electricity from the wind. In January 2014, wind supplied a whopping sixty-two percent of that country’s electricity. Portugal and Spain each got over twenty percent of their power from wind in 2013, and Ireland produced seventeen percent. Indeed, on some days, wind power supplies half of Ireland’s electricity. In Spain, wind is challenging nuclear power to become the country’s leading source of electricity. And for several days in August 2014, electricity generated from wind in the United Kingdom eclipsed that from coal.”

While initiatives toward the alternative energies offered by solar, wind, geothermal, tidal, hydrogen, and bio-fuel are being initiated throughout the world, they have not yet appeased the gods of American capitalism. While they are gaining ground in the hundreds of utility-scale solar power plants in development throughout the Southwest, Iowa and South Dakota are generating at least twenty-six percent of their electricity from wind farms, and Texas is now getting nearly ten percent of its electricity from wind power, the US still seems to be gaining very slow ground in the move toward sustainability beyond profit. As visionary as we like to think we are, the crux of our vision has been in the development of finance for the freedom that it simulates which, as we have been wading through the residue of such toxic productions as oil, tobacco, and money, has left us in quite a dissociative state.

Besides, the countries that are guiding these movements toward more efficient, cost-effective, and environmentally congruous advances tend to favor socialist methodologies, and America has shouted too loudly of those evils to fully reconsider that notion. While Bernie Sanders’ presidential campaign brought “democratic socialism” into the American lexicon, the competitive sensibilities inherent in winner-take-all capitalism provides a daunting challenge for those overly grounded in a sense of independence.