“The amount of money and of legal energy being given to prosecute hundreds of thousands of Americans who are caught with a few ounces of marijuana in their jeans simply makes no sense – the kindest way to put it. A sterner way to put it is that it is an outrage, an imposition on basic civil liberties and on the reasonable expenditure of social energy.” – William F. Buckley Jr.

In addition to tobacco, another crop that was a large part of America’s development was hemp, or cannabis. Since the plant has several thousand uses, there is good reason to believe it was used quite a lot throughout the last few millennia. Yet its use has been largely shut down over the last century as other industries that deal with resources of a much more finite supply assumed predominance in the industrial market by orchestrating the grandest display of corporate sabotage through propaganda the world had yet seen.

Throughout the colonies, hemp was another staple cash crop that was grown right alongside tobacco. In most every society where it was used, it was heralded for its hearty fibers, healthy oils, nutritious seeds, healing properties, and of course, its medicinal and narcotic applications. Although Thomas Jefferson is cited as saying, “Some of my finest hours have been spent sitting on my back veranda, smoking hemp and observing as far as my eye can see,” it has not been verified, and there is no real evidence that cannabis was smoked for pleasure in the United States until the early 1900s, when it was introduced by Mexican immigrants.

However, cannabis was added to the US Pharmacopia in 1850, and though few of the uses included heating the oils to activate the properties of THC that elicit its euphoric essence, hemp still got some use. It was used most often for rigging lines on ships, and for quite awhile, we grew a lot of it in America. Both George Washington and Thomas Jefferson have records of growing it in their gardening diaries, and quite a few of the states made it mandatory for farmers to grow. 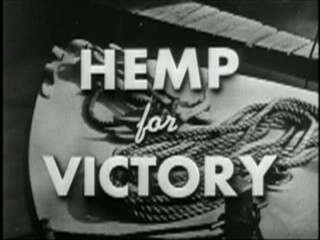 Yet, for many of its other uses, it was too difficult and expensive to process, so it wasn’t as successful as its initial competitors of cotton, timber, oil, and tobacco. Nevertheless, as technologies improved, and more efficient means of processing were developed, it occurred to some of the masters of the other industries, intent on developing their monopolies on American resources, that hemp could become quite a formidable competitor.

It’s an unfortunate fact of history that in the 1930s, as William Randolph Hearst was striving to turn his acres of timber into profit, and other leaders in non-renewable or limited resources, such as oil, cotton, and pharmaceuticals, were striving to pimp out their industries, seeing the potential for hemp to make their industries less profitable, or possibly obsolete, these industry leaders lobbied to make hemp illegal. Their method included three steps.

The first was to scare the public into believing that the hallucinogenic properties of cannabis sativa indica, known as marijuana by most, brought violence, insanity, and even death to those who used it. This scare also built on demonizing the plant due to its use by Mexican immigrants and African-American jazz musicians. Their sales pitch worked as they conjured images of crazy black men making off with Caucasian daughters, allowing them to move to their next step – convincing people that cannabis sativa sativa, the industrial hemp which has no hallucinogenic properties, actually had hallucinogenic properties. Once the connection was made, the third step was easy.

Due to this campaign of misinformation, we have relegated ourselves to cutting down millions of acres of forest, an act which has contributed greatly to climate change and rampant environmental degradation. We’ve forced our oceans and gulfs to suffer through a series of oil spills, and produced a variety of carbon emissions as petrochemical use has infiltrated our atmosphere with toxins, again contributing to climate change. And we have topped it off by polluting our waterways and diminishing our health with the use of harmful chemicals by growing inferior crops to provide our textile needs.

In 1970, Nixon passed the Controlled Substances Act, classifying a variety of pharmaceuticals and other drugs into schedules based on their potency. Although the “National Commission on Marihuana and Drug Abuse” deemed that marijuana was much less harmful than other narcotics, and even discussed allowing citizens to possess small amounts, the man who would soon become the first president to be removed from office for flagrant dishonesty classified marijuana as one of the most dangerous drugs in existence. After all, the predominant users of marijuana were still Mexicans and African-Americans, with the added population of Hippies, so political will for relaxing the terms of use wasn’t really high… and neither were most Americans. Alcohol was America’s drug of choice, especially after having had it taken away from us during those thirteen long years of Prohibition. At the time, few felt inclined to rock the boat for marijuana while they were perfectly comfortable floating in the bottle.

Yet the remarkable thing about capitalism is that it works regardless of whether or not the laws do. Just as the prohibition of alcohol allowed a grand opportunity for organized crime to thrive, as a black market commodity, marijuana has been an incredible cash crop, and cartels have been able to create a multi-billion dollar industry out of it, tax-free. Fortunately, people are starting to realize that it is wiser to bring that industry within the realms of legality instead of empowering the violence and irresponsibility of the black market. Since it has been legalized in a number of US states, its return to the free market has produced billions of dollars in only a few years, and is expected to contribute 35 billion dollars in revenue by the year 2020.111

As a promising sign of things to come, in 2014, President Obama passed a limited hemp bill, and as of this writing, thirty-five states have legalized industrial hemp, which is a grand step in the right direction, with the potential to be a huge boon for agriculture and a number of more sustainable industries. Hemp is a far more versatile crop than any corn or soybean on the market, and it could completely revolutionize our agricultural, textile, and fuel industries. And although the federal government still agrees with Nixon that marijuana has no medical use, thirty-one states have made marijuana available for a variety of medical purposes.

Nine states have even started to legalize or decriminalize recreational marijuana as more people begin to agree with Terence McKenna’s statement that “If the words ‘life, liberty, and the pursuit of happiness’ don’t include the right to experiment with your own consciousness, then the Declaration of Independence isn’t worth the hemp it was written on.”

The stigma around marijuana that the non-renewable-resource industries manufactured is still held by almost as many Americans as those who use cannabis. Yet, regardless of any fabricated fears that still remain in the American psyche, more and more people are awakening to the reality that cannabis in any form has never posed as great a risk to the human condition as oil, coal, tobacco, cotton, caffeine, beef, pharmaceuticals, or timber.

Should states and citizens continue to overcome the fears manufactured about cannabis, the plant may offer a number of solutions for the challenges we face. “As we use our last reserves of petroleum and pollute our world drilling for oil in areas where an ‘accident’ can quickly become an enormous ecological disaster,” Alan Archuleta wrote in The Gospel of Hemp: How Hemp Can Save Our World, “as our air becomes more and more polluted and unhealthy; as food, housing, energy, transportation, and clothing become less and less affordable; what can save the Earth and civilization? Hemp can!”

Archuleta speculates “Each acre of hemp can produce 1,000 gallons of methanol, which by a known catalytic process can be converted to 500 gallons of high-octane, lead-free gasoline. Hempseeds are 30 percent oil, and make a high-quality bio-diesel.”

Hemp is now also being used to detoxify and regenerate radioactive soil, and has been one of the most useful treatments to the earth surrounding Chernobyl. I happen to think it would be a great crop to grow to restore the nutrients depleted by industrial agriculture, hilltop coal mining, and all the phosphate mining that destroys so much of my home state of Florida. I imagine it might also grow really well in abandoned oil fields and land that has been fracked.

Let’s hope we embrace the freedom to find out.