Will Rogers once said “I’ve often said that I hope we never live to see the day when a thing is as bad as some of our newspapers make it out to be.” For Will Rogers Revived, in order to bring his outlook into modern times, I added, “either in print or Interweb (what I think Will would call the World Wide Web we know as the Internet), but I’m sure glad we’ve finally got a way to share pictures of cats.”

For quite a long time, our news outlets have glammed onto sensationalism as a way to get our attention. After all, people wouldn’t be as inclined to tune into the news if they were only reporting on what a beautiful day it was and how many things went swimmingly. In order to get eyeballs on the screen, they have to tell us about all of the things that are out of the ordinary, like war, murders, robberies, scandals, and other catastrophes.

The challenge is that we’ve all come to assume that these things are the status quo. However, although watching mainstream media, and quite a bit of what the head-nodders share through social media, would have us believe that the world is filled with violence and danger around every corner, the truth is that fewer people die in battle in this generation than any before, and our violent assault rate has actually decreased by roughly fifty percent in the last two decades. Perhaps it is because we also share so many pictures of cats and other examples of adorableness. 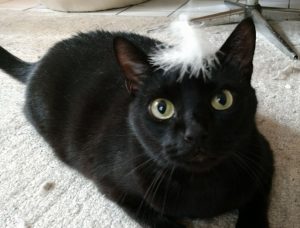 In this age of “fake news,” as terrible as life may seem while news outlets are selling our attention as the product, it would serve us well to remember that all news is manufactured and really only tells us a small portion of what is actually going on in the world. If you get distraught and overwhelmed by all of the terrible things news outlets tell you in order to increase their advertising revenue, it might just be a good idea to disengage with whatever screen or other source is making you feel that way, and enjoy a bit of the real world. I suggest you just spend some time petting your cat.