“If your ego starts out, ‘I am important, I am big, I am special,’ you’re in for some disappointments when you look around at what we’ve discovered about the universe. No, you’re not big. No, you’re not. You’re small in time and in space. And you have this frail vessel called the human body that’s limited on Earth.” – Neil deGrasse Tyson

It could very well be that our separation was merely the result of the emergence of individual personality, or as some have called it, the “ego.” Freud possibly coined the term, but the notion has been expanded upon since, both by other psychologists and spiritual texts. 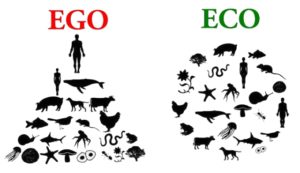 While Freud saw the ego as merely an aspect of the personality, many spiritual paths see it as one of the obstacles to our happiness. “The ego literally lives by comparisons,” says A Course in Miracles. “Equality is beyond its grasp, and charity becomes impossible. The ego never gives out of abundance, because it was made as a substitute for it.”

Eckhart Tolle defines the ego in his book A New Earth as “identification with form, which primarily means thought forms.” He states this is the same definition as evil, though he adds evil has a relative, but not absolute reality. If it is true God is the absolute reality, the Alpha and Omega, the beginning and the end, I Am that I Am, then it stands to reason evil is not an absolute reality and anything we identify with in form that draws us away from the one, true reality, separates us from It.

It may very well be that moving from a nomadic lifestyle to a sedentary lifestyle acclimated humans to consistent surroundings, and the familiarity with their new year-round environment developed some attachments. “This” land became “my” land, and eventually “that” woman became “my” woman. Given this new sense of ownership, and the protective jealousy that accompanied it, it is a bit more understandable as to why the ensuing narrative began to treat sex with shame as a way to end the rather promiscuous sex that occurred when things were shared.

As humans began attaching themselves to things outside of themselves, believing they actually owned the land which would outlive them, the animals who shared their environments, and the other people they could force to do their will, humankind had a break with reality, a disorder which we have cultivated ever since. For this disorder, which we refer to as the ego, has a pretty mean selfish streak, and as this new sense of sedentary independence began to take hold of the formerly rolling stones of humanity, what became “mine” in this new reality was “good,” and what was not was deemed “evil,” and so it should either become mine for its own salvation, or be destroyed. Obviously, some people are more egomaniacal than others, and we have more recently come to diagnose those with glaringly large egos as having sociopathic, bipolar, borderline, or a number of other personality disorders, yet it is arguably the same disorder from which our popular culture has emerged.