“No matter what Aristotle and the Philosophers say, nothing is equal to tobacco; it’s the passion of the well-bred, and he who lives without tobacco lives a life not worth living.” – Moliere

In addition to the slaves and gold, Columbus also brought something else back to Europe that may have had a greater economic effect than either of the other two commodities. Legend has it that when he first arrived on the beach, the natives gave him food and tobacco leaves as a gift. The Spaniards ate the food, but eventually threw the tobacco overboard, not knowing the purpose of the strange smelling leaves. Yet what he considered disposable, the natives considered quite useful, both as a medicine and an entheogen.

Amerigo Vespucci wrote about witnessing the practice of chewing tobacco, which natives did to alleviate toothaches because of the numbing sensation it provided. Yet there was also the numbing sensation of the mind, and the stimulative properties that accompanied its use. Due to its many uses, many of the natives considered tobacco to be one of the four Sacred Medicines, the others being sweetgrass, cedar, and sage.

Nicotine increases the frequency of the brain’s beta waves to gamma waves, thereby mimicking an ecstasy state, much like any other drug with which the world, guided by America, is currently at war. Due to its psychoactive qualities, native Americans would use it in rituals, including it as one of the key ingredients in their peace pipes as they would negotiate treaties and oaths, bond with one another, and send their prayers to the spirit world as they were absorbed through the smoke. 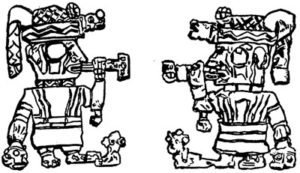 On Columbus’ second expedition, he was accompanied by a monk by the name of Ramon Pane, who wrote about the natives using tobacco as a snuff and smoking it through a pipe in his report “De Insularium Ribitus,” and he is credited with introducing tobacco to Europe. Yet although Pane got credit for it, he wasn’t the first Spaniard to engage with it. On the first expedition, Columbus had sent Rodriguo de Jerez and Luis de Torres out as scouts, and as they came upon tribes, Jerez reportedly became the first European smoker, although it was probably not the first case of peer pressure gone wrong. When Torres brought the plant back to Spain and smoked in public, the plumage of smoke from his nostrils as he puffed on his daily cigar really freaked everybody out, and when you’re smack dab in the middle of the Spanish Inquisition, that’s really not a wise thing to do.

Accounts vary on whether Jerez was jailed for 3 years or 7 for his “sinful” behavior, but it’s a sobering thought to consider how little things have changed in the realm of imprisoning people based on morality. Nevertheless, by the time Jerez was released, tobacco was legal and all the rage. From the Spanish colonies to all across Europe, use of tobacco spread like wildfire.

It reached France in 1556, but when Jean Nicot de Villemain, France’s ambassador to Portugal, sent some to Catherine de Medici as a treatment for her migraines ten years later, it was all over. Nicotine had taken hold of Europe, and from smoking to snuffing, civilization had found a new favorite pastime. Dozens of publications were released extolling the health benefits of tobacco, including Nicolas Monardes’ report on the 36 health problems that tobacco could cure in 1571 and Anthony Chute’s 1595 treatise “Tobacco” where he claimed that doctors were suppressing information about tobacco in the fear that it would put them out of business, an argument that many purport about cannabis and other plants to this day. Yet, despite all of the hoopla, some were also noticing some of the adverse effects of tobacco as well.

As it was becoming increasingly popular in the Spanish colonies, writer Gonzalo Fernandez de Oveido y Valdez, who was chronicling the colonization, remarked on the way that it caused the men to act as if they were drunk, and Bartome de las Casas wrote about how hard it was for the men to stop using it, and how dependent they found themselves becoming. Even Francis Bacon, although he wrote of how tobacco comforted his spirit, also wrote of how difficult it was to stop smoking. Literature began to arise warning of the dangers of tobacco, like A Counterblaste to Tobacco and A Warning for Tobacconists, which compared the lungs of tobacco users to those of chimney sweeps, but tobacco had already found its market, and the creature comfort had taken hold. 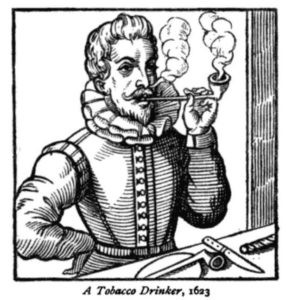 Tobacco was most likely introduced to England by John Hawkins, who is considered the pioneer of the English slave trade, after an expedition to Florida in 1565. When Sir Walter Raleigh introduced it to Queen Elizabeth, she realized its potential and taxed it accordingly, though her successor wasn’t too happy about it.

King James I was notoriously adverse to the notion of tobacco, writing A Counterblaste to Tobacco in 1604, where he referred to smoking as “a custom loathsome to the eye, hateful to the nose, harmful to the brain, dangerous to the lungs, and in the black, stinking fume thereof nearest resembling the horrible Stygian smoke of the pit that is bottomless.” In order to curb its use, King James imposed a 4,000% percent tax increase on tobacco. Unfortunately, although people did stop buying it at such ridiculous prices, the treasury took a big hit, and James was forced to drop the tax, recognizing a quick boom in the economy. It was this boom that would make the English colonization of the New World a reality.

In 1607, England only had one colony in the New World. Seeing how much money Spain was making off of their monopoly on the tobacco coming from the colonies, John Rolfe set out for Jamestown with some seeds that he thought might just help England give Spain a run for their money, so to speak. After getting shipwrecked in Bermuda due to a hurricane, Rolfe finally made it to Jamestown in 1610 to find only 60 survivors, with nearly 90% of the population having died in what was called the “Starving Time” of winter. The Jamestown colonists had endured outbreaks of malaria, hostility with the local natives, and a harsh winter that erupted in a lack of food, bringing several to the point of cannibalism, digging up and eating the dead.

When Rolfe arrived with his 142 men on the ships they’d built from the wreckage of the hurricane they had endured, they realized that they were only bringing extra mouths to feed to a community that couldn’t even feed themselves. They gathered up the survivors and started to head home when they were intercepted by another supply ship, giving Jamestown one last go. Rolfe got to work on his planting a sweeter strain of tobacco than the harsher flavored stuff that had been coming out of the region, pretty sure that, due to its flavor and increased nicotine buzz, it would find a market.

It is estimated that London had over 7,000 tobacco shops by 1614, when Rolfe sent his first shipment of tobacco back to England. Rolfe was correct in his assumptions, and Jamestown had found its salvation in tobacco. Although King James despised its use, he saw the demand, realized the ability to make money, and offered up a royal monopoly on tobacco to the highest bidder.

It should also be noted that it was during this time that the legend of Pocahontas arose. There are a variety of accounts as to how Powhatan’s daughter came to marry John Rolfe, including a love triangle with John Smith, her real name being Matoaka, and her kidnapping and conversion to Christianity, upon which she changed her name to Rebecca and became a spokesperson for investment in Jamestown after returning to England with her new consort. But since the story has grown so muddled with folklore and faerie tales, let’s just stick to the fact that tobacco was big business for England’s first colony, one that would invigorate the entire region.