“Debt . . . . that peculiar nexus where money, narrative or story, and religious belief intersect, often with explosive force.” – Margaret Atwood, Payback: Debt and the Shadow Side of Wealth

As nomads, life provided as we moved, and when there was no food in an area, we moved on to one in which there was food. When we became sedentary, we had to adapt our abundance operations and work to develop food instead of moving to find food. By developing the consistent tasks agriculture demanded in order to grow our own food instead of sustaining ourselves by the patterns of Nature, we created roles to be repeated and an indebtedness to repeat the role.

As we developed this new lifestyle, before we advanced to the development of actual money, we internalized the idea of primordial debt.

Although we’ve never really asked for them, we are given thousands of free breaths each and every day that we don’t even have to work for. They empower our bodies, with which we can move around and affect change on an extraordinary planet, and for this, we are indebted to our Creator. As life grew more complex through our new-fangled operations during our transition from nomads to farmers (and more so upon our eventual integration of industry and information), we found ourselves indebted to a variety of other things and people as well. As we started growing sedentary, and attaching ourselves to property as extensions of ourselves, we began to assume indebtedness to those who claimed the property, tilled the land, and provided that which we could not provide ourselves.

Many religions embraced the ritual of sacrificing animals to appease the gods and the debts humans owe them for their existence and their shortcomings. The entire Jesus narrative is based on the idea that our “sin” has created a price that needs to be paid, a debt we are unable to pay, but that has been paid for by the sacrificial Lamb of God. 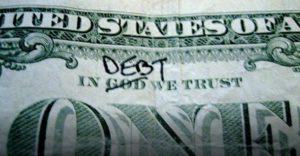 The Bible is replete with mentions of money, debt, payments, and sacrifice, as are the Koran, the Vedas, and many other books of accepted scripture holding sway in how we develop society. According to most of our religious beliefs, the general consensus seems to be that life is debt.

These beliefs began as oral tradition, stories around the campfire, and as they continued to be told and embellished upon, legends were born, fears were established, and patterns were developed. The stories we started became, for some, the impetus for our decisions, and as the stories expanded from the God to whom we owed life to the gods to whom we owed livelihood, our labor was manipulated to fulfill a function in the developing civilization.

Just as we realized our ability to domesticate animals and have them do our bidding for us, some of us realized how we could domesticate other humans as well. For those who assumed control and ownership of the land, either through force or through wit, they were able to provide food and shelter, things abundantly supplied as nomads who knew how to look for things, but were more scarce when tribes became immobile. As landowners provided these things for those whose egos had not claimed ownership of land, those with no land became indebted to those who claimed it it as their own.

Because those without land had nothing with which to pay this debt after living simply and nomadic for so long, their servitude became payment, and further divisions were established among humankind. As those with property, plans, and power started providing the direction on how the resources of land and labor would be used, they assumed a higher, more noble role than those who were content to move rocks and plant seeds, and so the initial roles of masters and slaves were born.

As time would move on, the masters became kings and established states, and the slaves became subjects, who would later become citizens. Yet the hierarchy of servitude was established as many were forced to work for a living to pay off their debt to the society which was being established around them, and some would make their living by directing that debt to create more affluence. Ambrose Bierce put it well when he said, “Debt is an ingenious substitute for the chain and whip of the slave driver.”