“If you want to make a little money, write a book.

If you want to make a lot of money, create a religion.”

By the time the Roman Empire fell, the Roman Catholic Church had already grown to the point where it was no longer reliant upon the government to support it. However, it wasn’t quite able to fully defend itself, and as Muslims started moving into the territory around Jerusalem, Pope Urban decided to call in Christians throughout Europe in 1095 to come chase their estranged cousins out. Although the 7 or so Crusades that happened throughout the next couple of centuries created a lot of misery for everyone involved as various popes called for bloodshed, they did prove that war was an effective way to generate money, and it was largely thanks to the Crusades that banking was back in business. 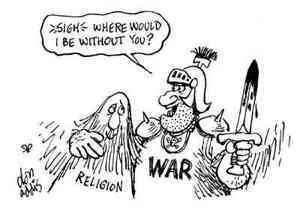 Henry II used the Crusades to levy quite a few taxes, assigning the Templars and Hospitallers to collect payments throughout the Holy Land for the “protection” they offered, an early model of the protection the mob would come to use later on. When Richard I took the throne in 1189, he privatized the assets of the monarchy to pay for his own Crusade, and managed to get taken prisoner on his way through Europe, discovering yet another way that war can improve the economy – ransoms. The Crusades went on until about 1270, just before Marco Polo showed up in China and discovered how well paper money had taken hold. He wrote a chapter in his book called “How the Great Kaan Causeth the Bark of Trees, Made into Something Like Paper, to Pass for Money All Over his County.”

The book was eventually titled with more brevity as The Travels of Marco Polo, apparently ghostwritten by his cellmate when he was imprisoned on his way back from China. Word of this paper money started to spread upon his release, along with the concept of burning coal for fuel, an idea which would later be greatly instituted throughout Europe to usher in the Industrial Revolution. But until that technology took hold, the English monarchy introduced the tally stick, a simple stick that was used to measure how many taxes people had to pay to the crown.

In 1348, the Black Death broke out, starting a slew of plagues that reduced the population around Europe and collapsed the economy. As Europe rose out of this recession, Florence, Italy made it legal to charge interest, laying aside the Christian prohibition on usury, and banking got another push toward legitimacy.

About a hundred years later, some really interesting and contradictory movements started to happen in different parts of the globe. In 1440, Gutenberg invented the printing press, and although Europe wouldn’t start using it to print money until after Sweden successfully experimented with it in about 1600, the world of mass printed books revolutionized the economy and brought humanity into the age of modernity. Oddly enough, after about 500 years of experimentation and just a few years after the printing press was invented, China gave up the use of paper money in 1455.

It is amazing that a society can have something ingrained into their culture for so long, and then just stop using it. But if China could give up paper money after 500 years, perhaps that should give us a little more hope as we deal with the nonsensical economic realities we’re currently clinging to. And as long as we’re thinking outside the box, we should take just a moment to consider that the Incas developed one of the most formidable empires in South America, and they didn’t use money at all.