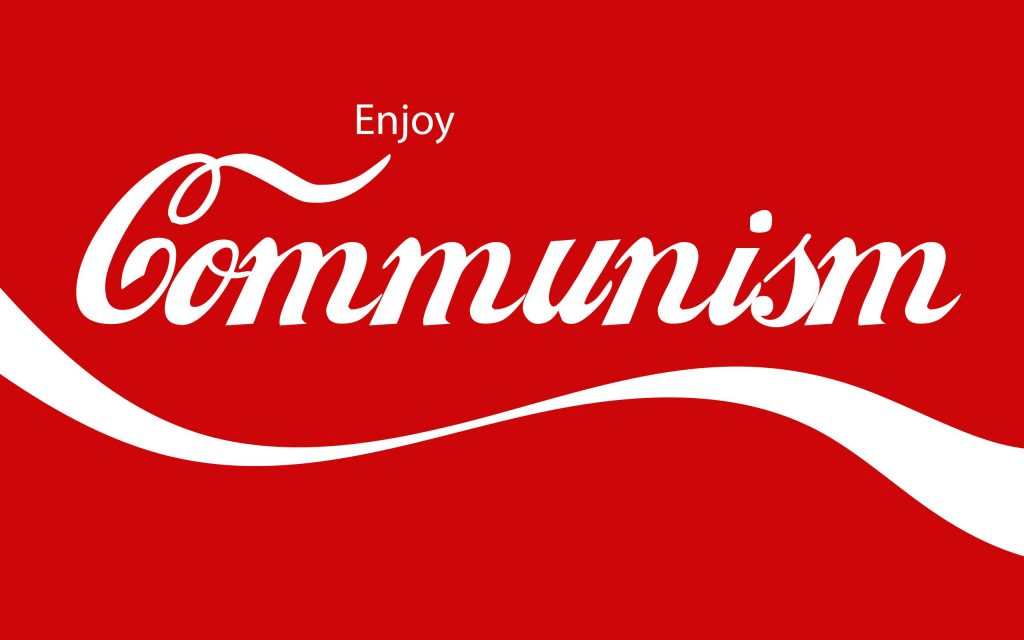 When communism began to gain in popularity, those in the home of the brave got scared. Emboldened by their endeavors of capitalism, its criticism by Karl Marx in his 1867 book Das Kapital, that capitalist competition “ends in the ruin of many small capitalists, whose capitals partly pass into the hands of their conquerors” was not a welcome perspective. Things were moving along at a really nice clip, and there weren’t many who were willing to consider the idea that their system of wealth development would eventually concentrate the majority of the wealth into the hands of a few. And if they did, they were most likely hoping they would be one of the few, just as proponents of capitalism do today.

Nevertheless, to many of those who weren’t rolling around in the wealth, but upon whose labor it was built, the ideas of communism didn’t seem like such a bad thing. As factories developed, and people were forced to work excruciatingly long hours under often deplorable conditions, the concepts of protecting the rights of workers were a welcome reprieve to those who were working to increase the wealth of the community. Although Marx and Friedrich Engel, who co-wrote The Communist Manifesto together, had long since passed on, their writings gained popularity among the working class of America, and the Communist Party started to grow in the United States.

Marx and Engels felt that industrialization through capitalism had a polarizing effect on society and that those who owned the means of production were taking unfair advantage of those who performed the labor. Their most ardent criticisms of capitalism were that the method of competition relies on having losers, results in monopolies of wealth and power, and lacks centralized planning, which creates inflation and depression, gives the wealthy inordinate control over the state, and produces economic disparity through the proliferation of economic classes of rich and poor.

“The history of all hitherto existing society is the history of class struggles,” they wrote in The Communist Manifesto. “Freeman and slave, patrician and plebeian, lord and serf, guildmaster and journeyman, in a word, oppressor and oppressed, stood in constant opposition to one another, carried on an uninterrupted, now hidden, now open fight, that each time ended, either in the revolutionary reconstitution of society at large, or in the common ruin of the contending classes.”

While America was still in the throes of delight over their version of democracy, Marx and Engels were also critical of representative government. “The oppressed are allowed once every few years to decide which particular representatives of the oppressing class are to represent and repress them.”

Their words appealed to the common people, and found a ripe audience in those who were already growing disillusioned with the American Dream. Yet with the fear of “abolition of private property” as the Communist end game, most Americans were still wary of having their dream taken away, as well as their property.

“You are horrified at our intending to do away with private property,” wrote Marx and Engel, “but in your existing society private property is already done away with for nine-tenths of the population; its existence for the few is solely due to its non-existence in the hands of those nine-tenths. You reproach us, therefore, with intending to do away with a form of property, the necessary condition for whose existence is the non-existence of any property for the immense majority of society.”

The ideas that communism brought to light weren’t necessarily anything new. Plato had discussed the concept of shared property in The Republic, Thomas More had shared his version of communal wealth in Utopia, many of the early Christian factions espoused the ideals, and other writers had addressed many other versions of more harmonious living situations than the incessant propagation of conquest and competition. However, as capitalism took hold as the modus operandi of the New World, this resurgence of thought came to America as a way to balance out the fervor of competition at all costs. For those who were already feeling the effects of these conditions, and those who sympathized with them, communism was a fresh and welcome perspective.

While the Communist Party did much to help establish labor unions and fight racial segregation in America, ultimately, it didn’t establish a strong enough foothold to last. Part of the problem was that in the countries in which it did take hold, it was instituted in direct opposition to many of its own ideals. Instead of rising to power through the empowerment of workers, it was forced upon the citizenry through military might and further subjugation to the state.

Although Marx had said that “I do not like money, money is the reason we fight,” as his belief system was adopted by nations as a counterpoint to capitalism, communism itself became yet another reason to fight. Integrated by dictators like Joseph Stalin of Italy and Vladimir Lenin of Russia, communism morphed from a vision of communal bliss to a method of subjugation beyond even the inequality being established through capitalism. Due to the militaristic advancement of this means of cooperative living, those in America who saw the personal gain that capitalism offered highlighted this hypocrisy, and fanned the flames of “The Red Scare”.

After the Bolshevik revolution of 1917, when communism became the prominent party in Russia, the first Red Scare spread through America as a way to subdue the reformation of workers’ rights. Although the Communist Party quickly grew to a membership of over 50,000 people, and had some influence in establishing better conditions for workers, the acceptance of communism was adequately squelched. When Russia’s power increased in the 1950s, the second Red Scare was even more resolute in crushing the possible revolution.

As Senator Joseph McCarthy led the battle against communism in the United States, buoyed by FBI director J. Edgar Hoover, the fear of this methodology was perpetuated throughout the media by portraying it as the antithesis to all things that Americans held dear. Now touted as godless heathenism, these same notions that had been embraced by early religious groups were tied to the growing military and nuclear threat of Russia and its warped version of communism, exacerbating yet more violence and inequality.

Building on Marx’s view of religion as the “opiate of the masses” and his statement that “The first requisite for the happiness of the people is the abolition of religion,” McCarthy and the movement he inspired instead used religion as a stimulant and resolutely divided the world into two halves. Ushering in the concept of a “cold war,” McCarthy stated that “This is a time when all the world is split into two vast, increasingly hostile armed camps—a time of a great armament race,” and continued to paint communism as a “religion of immoralism” that would “more deeply wound and damage mankind than any conceivable economic or political system.”

In 1955, when 70% of Americans claimed to be Protestant and 22% claimed to be Catholic, McCarthy’s task of repudiating communism was made much easier when Congress seized the notion of God as a capitalist doctrine and added “In God We Trust” to our money. Routing out suspected communists in the government and educational sectors while invoking a blacklist of suspected communists who were unable to work in the entertainment industry, McCarthy called his campaign “a final, all-out battle between communistic atheism and Christianity,” fusing the ideologies of religion, democracy, and capitalism, thereby making capitalism sacrosanct and the only feasible means for the further development of civilization.

Although McCarthy established only two sides to political possibilities, and capitalism undoubtedly won out over its communist counterpart, Marx had seen capitalism as a necessary precursor to communism, as mankind worked through its issues and evolved into a more civilized community. However, McCarthy’s fabricated dichotomy wasn’t the only realm in which Marx saw room to grow. The battle of the sexes was another issue that was raising its head in this century as women were realizing that, although Marx did not get his way in the economic and political struggle, he was right when he pointed out that “Anybody who knows anything of history knows that great social changes are impossible without the feminine ferment. Social progress can be measured exactly by the social position of the fair sex (the ugly ones included).”