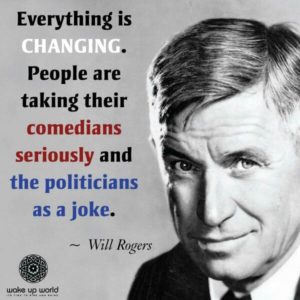 “Everything is changing,” Will Rogers said nearly a century ago. “People are taking their comedians seriously and the politicians as a joke.”

It’s been at least seventeen years since I started getting the majority of my news updates from The Daily Show. For years, I’ve considered Jon Stewart to be the most trustworthy journalist on television. Although he loudly proclaimed his news program as “fake,” it was still more honest than what I was seeing on the other channels.

These days, as The Daily Show correspondants have expanded to their own shows to mock the government and those who still believe in its virtue, it seems that Will’s joke has become an absolute reality. Whether it’s Stephen Colbert, John Oliver, Samantha Bee, the other late night comedians like Jimmy Kimmel, Bill Maher, and Jimmy Fallon, or the sketches on Saturday Night Live, it seems as if things have reached a fevered pitch of people preferring the truth of comedy over the nonsense of reality. Perhaps this rising plethora of fake news comedians is filling in the gap for the crumbling faith in our system. As Will Rogers said, “As our government deteriorates, our humor increases.”

Perhaps this will wake us up to what a joke our government really is. Or perhaps we’ll realize that, ultimately, we’re the butt of the jokes.

“I urge my colleagues to stand up and be more forceful. Anyway…SEE YA, SUCKERS!” https://t.co/k3n89FDBuw

As America’s favorite humorist in his day, Will Rogers enjoyed comedy because it made people think. “Personally, I don’t like the jokes to get the biggest laugh,” he wrote in his autobiography, “as they’re generally as broad as a house and require no thought at all. I like ones where, if you are with a friend, and here it, it makes you think, and you nudge your friend and say, “he’s right about that.” I would rather have you do that than to have you laugh, and then forget the next minute what it was you laughed at.”

In his day, Will poked fun at the pageantry of the Democratic and Republican parties, and though we’re still toying with the notion that they’re actually two different parties, I’d like to think that more people are opening up to the fact that they still each have the same goal, and it’s not really the virtuous benevolance that any of us might think.

Will even pointed out the challenges of using the Republican model of government over the Democratic model we pat ourselves on the back for, although we’ve never actually used it. “The big challenge,” he said, “is that anything important is never left to the vote of the people. We only get to vote on some man; we never get to vote on what he is to do.”

Of course, we’ve never actually had the technology to have an actual democracy before, but now, we’re at least at a point where it’s a possibility. Although not everyone has immediate access to the Internet, we’re getting closer. It still may very well be that our biggest hurdle in using technology to implement an actual democracy is our fear that it could get more corrupted than the systems we’re currently using to support our republic.

I’ve got a feeling that one day we’ll all look back on it and laugh.