“To call woman the weaker sex is a libel; it is man’s injustice to woman.

If by strength is meant brute strength, then, indeed, is woman less brute than man.

If by strength is meant moral power, then woman is immeasurably man’s superior.

Has she not greater intuition, is she not more self-sacrificing,

Without her, man could not be. If nonviolence is the law of our being,

the future is with woman.

Who can make a more effective appeal to the heart than woman?”

The Code of Hammurabi spoke to one of the only economic activities women were allowed to engage in, and it had nothing to do with working the fields or rounding up cattle. It’s often said that prostitution is the world’s oldest profession, but it’s more accurate to say it was the first profession open to females. Between the time humans practiced a more egalitarian lifestyle with a more open sexuality, to the time ownership of property expanded to include other people, there were probably a great many other paying jobs people were doing besides helping each other get off, but few of them were open to women.

As humankind began to drop the practice of emigration, they had to adapt to the limitations of their new sedentary lifestyle, and people were surely busy at work growing and collecting food, capturing trainable animals, and performing all of the tasks that provided for the general welfare, yet in this new monetary game of organization and accounting, only men got to play. Perhaps it was the phallic shape of the pen that inspired men to hold it as their exclusive power of creativity. Since they had no womb in which to create life, perhaps men hoped to establish a power of their own by developing a new system they could control, and thereby gain one-upmanship on the fairer of their species.

While the monetary ideology was inspired by these tasks, and the grains and cattle they developed were more influential than orgasms, just as the sedentary lifestyle started to manipulate the communal bonds people once shared as egalitarian nomads, so did it manipulate the formerly natural relations between man and woman. Before it was legitimized through religious ritual and government dictate, the first “wives” men claimed as their exclusive lovers were most likely not romantic soulmates, but property. 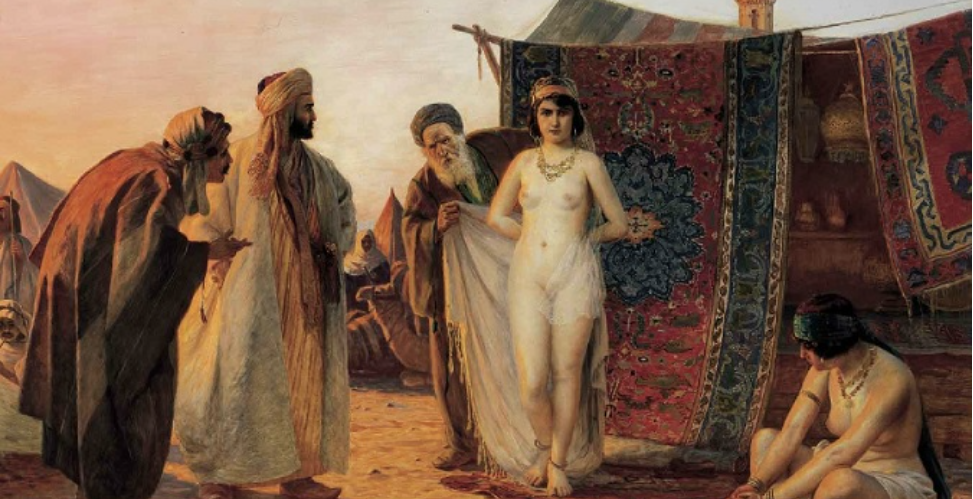 “Remember the Tenth Commandment,” wrote Cathilda Jethá and Christopher Ryan in Sex at Dawn, “’Thou shalt not covet thy neighbors house, thou shalt not covet thy neighbors wife, nor his manservant, nor his maidservant, nor his ox, nor his ass, nor any thing that [is] thy neighbor’s.’ Clearly, the biggest loser (aside from slaves, perhaps) in the agricultural revolution was the human female, who went from occupying a central respected role in foraging societies to becoming another possession for a man to earn and defend, along with his house, slaves, and livestock.”

As humans adopted the concepts of ownership, most likely due to the male’s generally superior physical strength, the men were the ones battling things out over territory, and eventually expanded their ownership of the land to the people on it. Consumed with their newfound power, men seemed to get fairly accustomed to developing their boundaries of ownership, and soon started laying claim to the women of the region. Although there aren’t many writings from this era, the ones we have, each speak to the ownership of slaves, particularly to the ownership of female slaves, so while it’s traditional to say that prostitution was the first profession, it is more likely that pimping was.

Although many today claim the Bible states marriage is supposed to be between one man and one woman, a good number of the men had a great number of wives, and a backup platoon of concubines. Generally, this type of polygyny was reserved for kings and the wealthy, and it seems the more land a man had, the more women he claimed as his own.

“Where monogamy was prescribed,” says Lawrence Fuchs in Beyond Patriarchy: Jewish Fathers and Families, “only 16% of 853 cultures surveyed by Helen Fisher – it was normal for high status, powerful men to have multiple sexual partners. Marriage, whether monogamous or polygynous, enabled a man to pass on status and property to his heirs, as Roman nobles did, even the kept female slaves. In medieval Christian Countries, monogamous marriage, assuring patriarchal fathering for heirs, and polygynous mating, assuring sexual outlets for their fathers, coexisted comfortably.”

“Even in rare societies that were officially monogamous, such as Homeric Greece,” says Martin van Creveld in Equality: The Impossible Quest, “chiefs regularly built up large harems consisting of female slaves. Polygyny meant inequality in the sense that, whereas some had as many women as they wanted and to spare, others had to go without.”

In order to track their lineage and build their empire, men took wives, sometimes many. It is likely that the death sentence for adultery was designed more to enforce the economic accounting system of power than to administrate the wrath of God. As the ideas of church, state, and money focused the patriarchal world view, their power was regularly achieved by force, both violently and sexually.

“Long before Josephus wrote about monogamy as the norm for Jews,” Fuchs continues, “male ancestors of the Jews behaved, as already seen, in sexually predatory ways, using sex both as an instrument and as a benefit of power. We learn from the Bible that they offered wives to powerful men as a form of hospitality and as an expression of deference, and that fathers gave daughters to powerful strangers. Daughters and wives were virtually owned by male patriarchs, and males engaged in warrior competitions to determine the most powerful of them.”

According to Dr. Michal Price in his Psychology Today article “Why We Think Monogamy is Normal,” “The ancient Greco-Roman and medieval European leaders who embraced anti-polygyny laws were heavily invested in the business of war, and their own social status, and indeed survival, often depended on their ability to maintain large, well-funded armies. And the imposition of monogamy produced bigger, better armies, because monogamous groups can grow larger than polygynous ones… Socially imposed monogamy, therefore, emerged in the West as a reciprocal arrangement in which elite males allowed lower-ranking males to marry, in exchange for their military service and tax contributions.”

For the women who weren’t married off to those who were settling into their territories and claiming their property, considering they could most definitely meet the supply for the growing demand, some became prostitutes. Of course, prostitution then wasn’t entirely like prostitution today. There were those who were broke, and stood at the side of the road and waited for shepherds or goat-herders to come along, offering up sex in exchange for livestock, but there were those who held more honorable positions as well. 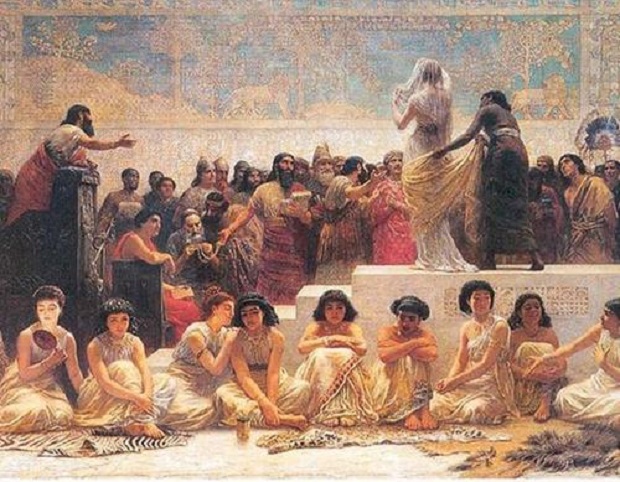 Greek historian Herodotus spoke of shrines called “houses of heaven” where they practiced sacred prostitution, as did the Aztecs. While Israel would denounce the custom of venerating sexuality outside of their new custom of marriage, that didn’t stop prostitution from happening. Even Muslims integrated a “fixed-term marriage,” a nice little win/win situation where a man and women could have sex with the approval of Allah, the woman could get paid, and they could part ways to get on with their lives.

Of course, prostitution wasn’t limited to women. Actually, some of the more prodigious “houses of heaven” specialized in the sacrament of sodomy, and in the highest echelons of power, the most sought after lovers were often young boys and other men. Perhaps it was man’s infatuation with his own phallus, but despite the cultural call to action on populating the earth through progeny, homosexuality has been a constant proclivity throughput the known civilization.

In most of the other countries developing at the time, homosexuality was quite popular. However, the Judaic tradition outlawed it, as well as a number of other sexual encounters for which they stated people should be put to death. Yet as we’ve seen with the sexually inappropriate proclivities of so many priests, even the most ardent laws have not kept sexual activity at bay, but merely transmogrified it through suppression.

In many ways, prostitution in those days didn’t differ much from prostitution now. Granted, they didn’t have the global trade we have now, but young girls were still abducted and sold into a lifetime of sexual puppetry. For many women, for those who weren’t claimed as wives and who had no other access to money or the means to get it, there didn’t seem to be any other choice.

Unfortunately, after several centuries, it doesn’t seem like we’ve made much progress in providing for human needs in a way that would keep women from having to choose such a lifestyle. With the political government of the State and the religious government of the Church giving more importance and credibility to mankind’s newfound obsession with using his game of money to keep score than to the actual well-being of humans, they were stuck then as we’re stuck now, with those who claim to protect us shrugging their shoulders at our suffering under the hopeless reality of “just the way things are.”

Indeed, oppression was an obtrusive symptom of what Daniel Quinn calls the Great Forgetting, bringing the plagues of slavery, prostitution, and warfare into our heretofore peaceful co-existence. Even in the simple relegation of women to a lower class in society, where their voices were not meant to be heard, and their opinions were to be non-existent, we have oppressed the human spirit and hobbled our species by giving dominance to only half of it.

No one is exactly sure what happened for the 193,000 years we weren’t writing stuff down, but by the time men did finally start to transcribe their account of things, women weren’t really portrayed in the best of lights. In the Bible, for instance, few women are featured, and those who are are mostly cast as prostitutes (albeit with hearts of gold) like Tamar, Rahab, and Mary Magdalene, or bad apples like Eve, Delilah, and Salome (assumed to be Herod’s daughter). If biblical women aren’t tempting, trouble-making, or just filling in as fringe characters to support “his” story, women are characterized as the models of obedience and loyalty the men wanted them to be.

Even in the biblical geneologies, the women who grew each of the leaders in their bellies for 9 months aren’t even given a shout out. Instead, a long string of men begat one another as they began to celebrate their new understanding of paternity through systems of one-sided monogamy and polygyny.

I’m not trying to be too egregious toward men, as I am one of them, and I can assure you we’re not all complete dicks. Although sometimes, if I’m being completely honest, we are predominately dicks. Nevertheless, I’m open minded enough to recognize that women have gotten a really bad rap in my culture.