For the third installment of the current incarnation of The Cowboy Cabaret at The Starlite Room, I had a total of 11 people in the audience. Fortunately, they were a gracious audience that gave me a standing ovation at the end. Overall, though it wasn’t the showing I would have wanted and my opening act backed out at the last minute due to illness, it was a pretty good show.

Of course, I’m still hoping for bigger numbers next time, but I’m thinking that I won’t rely on Facebook as heavily. And maybe I should stop being such a hermit.

After my spoken word introduction, I invited 3 volunteers onto the stage to become “cowboy certified” before selecting the songs for the evening. As they thumbed through the 53 cards I’d selected for the 5/3 show, I continued on in my rhyming dissertation until they’d selected their 12 songs.

I glanced through them and got to work.

I started with “I Still Haven’t Found What I’m Looking For” by an Irish folk band that has since become digitized, leading right into the worst performance of Waylon Jennings’ “I’ve Always Been Crazy” that I’ve ever done. That sort of set the theme for the next few songs, but as I said, the audience was gracious.

The poem for “What’s So Funny About Peace, Love, and Understanding” got some applause, which seemed to make the audience amenable to my starting the song over when I started with the wrong verse. My friend Russell said that my vocals on Prince’s “Raspberry Beret” were especially good, and though Hank Williams’ “I’m So Lonesome I Could Cry” was picked, I tend to throw in “I Can’t Help It If I’m Still In Love With You” and “Long Gone Lonesome Blues” to turn it into a medley because the songs are just way too short without a band to fiddle and slide with.

After seeing Elvis Lives at the Van Wezel with my parents a few months ago, I decided to learn a song by the King, and had my first public performance of “Suspicious Minds.” “The Sound of Sunshine” by Michael Franti and Johnny Cash’s “Folsom Prison Blues” are always crowd pleasers, and we had a nice dose of pop culture with Cyndi Lauper’s “True Colors” and Michael Jackson’s “The Way You Make Me Feel.” Since I have two different versions of “I Believe,” one by Blessid Union of Souls and one by SOJA, I asked the audience to choose. They chose both so I played them, as it was my first time playing the SOJA cover in public as well. 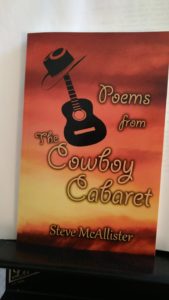 Since we were having fun, and since I wanted to play some more, I added in “Suddenly Seymour” from Little Shop of Horrors and Neil Diamond’s “Love On The Rocks” from The Jazz Singer.

Overall, it was a fun show. I passed my hat, and they filled it up, and I was able to give the very first printed copy of Poems From The Cowboy Cabaret to a dear friend of mine, who said that the poetry was his favorite part of the show. Hopefully, I’ll get a bigger turnout next time, but I did end the show with “You Can’t Always Get What You Want” so you never know.