“We are being made aware that the organization of society on the principle of private profit, as well as public destruction, is leading both to the deformation of humanity by unregulated industrialism, and to the exhaustion of natural resources, and that a good deal of our material progress is a progress for which succeeding generations may have to pay dearly.” – T.S. Eliot

Although England’s naval powers weren’t enough to defeat the spirit of independence that was surging through the hearts of the colonists, it was enough to get a leg up over the rest of Europe. Now strong enough to defeat France, England was able to trade more freely and had great access to raw materials. With these new materials came new innovations.

In the early 1700’s, much of the English population worked from home. Many worked in agriculture, tilling the soil and tending the crops on feudal lands in order to produce enough food for the entirety of the community. Many others worked as craftsmen and artisans, producing textiles, tools, and other products right from the comfort of their own homes. Toward the middle of the century, as entrepreneurs increased their capital by acquiring raw materials, they began to invest in means of faster production, kickstarting what would come to be called the Industrial Revolution.

For those who were growing food in England, the changes started as the landowners called for more diverse growing capabilities, and more fences. Often, this forced workers to be uprooted from their homes to make room for more crops or move to the growing urban centers. Those who continued to work the fields, although they already faced chronic hunger and malnutrition at a time when the average lifespan was less than 40 years old, their energies were diverted into growing cash crops.

For those who were operating cottage industries, investors saw that the practice of delivering raw materials and picking up finished pieces was largely inefficient and didn’t produce enough quality products. As inventors produced machines to replace the work of people, many of the cottage workers went to work operating the machines in the factories. As nobles started expanding their agricultural lands onto the Commons, those who were displaced found refuge in the growing cities to also work in the factories.

Whether or not the Industrial Revolution was a blessing or a curse is a matter of perspective, and the best fruits wouldn’t be seen for another century. Industrialization did produce a new middle class, developing a number of jobs for lawyers, accountants, and other pencil pushers, and it did provide jobs for the poor. Unfortunately, the jobs that were provided for the poor didn’t do much to keep them from being poor. In the developing cities, shanty towns were rampant as factory workers often shared dirt floor lean-tos, and families slept on beds of straw as they eked out a living by working long days every day. 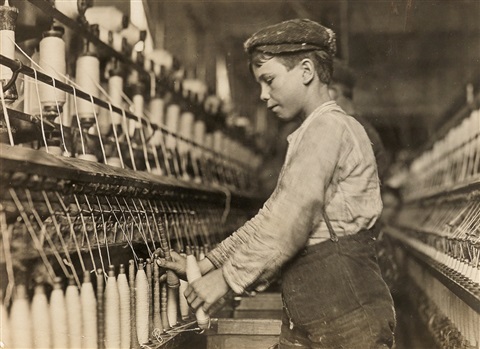 Because the growth in agriculture had led to a population boom, with the population doubling in each of the next two consecutive centuries, child labor was used heavily as the factories worked hard to make up the investments that created them. Some accounts state that as much as two thirds of the labor force in the water-powered cotton mills were children. Factory owners could pay children less than adults and could work them very long hours.

It was common practice in both the coal mines and the textile factories to treat workers, especially children, abusively. In addition to the hazards of the working machines, to which a number of children lost limbs and lives, and the dangers of the chemicals that their still-growing bodies channeled into abscesses and other anomalies, children working in factories were regularly beaten as their productivity was compromised by fatigue. Some of those in the upper and middle class who caught wind of these practices spoke out against them. The factory owners would defend themselves by highlighting the benevolent services they offered by allowing children to work for food so that their families wouldn’t starve.

It wasn’t until the 1830’s that the Factory Acts permitted children over the age of nine to work no more than twelve hours a day, six days a week. Considering that children as young as four were working fourteen hour days, it was a marked improvement. Nevertheless, although the upper class saw immediate benefits from industrialization, and the middle class saw eventual benefits, for the poor, the movement forced people out of their homes, away from their families, and into situations that mandated that they work incredibly long hours merely to survive.

However, not all of the craftspeople acquiesced to go work in the factories. The Luddites, as they came to be called, loved to perform their crafts of building, weaving, printing, and many other artisanal trades that were threatened by the mass production through unskilled labor that industrialism had birthed. Banding together to ensure their survival, what started as protest became property damage as the Luddites destroyed factory equipment, erupting into an all out battle before industrial sabotage became a capital crime.

Although the uprising was eventually squelched, it may very well be that the awareness of the Luddite movement started the notion of unionization, sparking a realization for the middle class artisans that could still afford to remain entrepreneurial. Throughout each technological advance since, there have been those who have been wary of the growth in technology as mechanization takes us further and further from actual participation in life. While that independent spirit of humanity is sure to remain and balance out our tendency to get overwhelmed by technological excitement and systemic development, it has yet to slow the speeding train of industrialization.

However, the early stages of industrialism weren’t easy, as capitalism was already showing signs of weakness. The leaders of the South Sea Company had a monopoly on trade and wanted to assume more stock in the government, which would assumedly give them much more political leverage, so they started letting those who owned government bonds trade them for stock in the South Sea Company for a really reasonable rate. Unfortunately, it was a bit too reasonable to be reasonable, and the scheme resulted in the world’s first stock market crash.

A bit unhinged by the crash, as well as the near simultaneous crash in France, but also wanting to support the now “too-big-to-fail” South Sea Company, Parliament passed the Bubble Act in 1720, instituting a 105 year moratorium on the development of any more corporations. Whether or not the use of corporations in the early days of the Industrial Revolution would have made things run more smoothly, or astoundingly more complicated, can only be speculated upon. Nevertheless, after such an abject failure to deliver the abundance it promised, Parliament was probably right to be a little spooked by the frailty and fallibility of the corporate entity. Some would argue that it slowed progress, but considering how adept America would become at industrialization, it is safe to say that we’ve made up for lost time.

America got its first horse-powered cotton mill in 1787, which was a major boon for the fledgling country. But if England was adverse to fully empower the colonists while they were still under British control, they were loathe to help them so closely after their revolution and Declaration of Independence. So when Samuel Slater took all that he had learned from years of being an apprentice in the British textile industry, immigrated to America, and started the first water-powered cotton mill in the country, England was not too happy about it. Although Slater would come to be known as the “Father of the American Factory System,” defying the laws against the immigration of skilled tradesmen and industry secrets, across the pond, he was known as a traitor.

Again, pragmatically considering that the roots of American industry were based in such a claim of compromised integrity, we should find no surprise in the fact that the larger corporations which have grown from the movement are so quick to take what they have gleaned and run off to other countries to expand their riches. Nevertheless, it took quite a few years for corporations to take hold in America as the colonists overcame the economic limitations of mercantilism beset upon them by England. At the dawn of its independence, there were only seven chartered corporations, and the first major industrial corporation, the Boston Manufacturing Company, wouldn’t emerge for another thirty-seven years.

However, when Americans eventually started realizing the potential of corporations, they would master the craft of creating them, and eventually, give them the same rights as humans.