If you’re up for a good reality check, The Crisis of Civilization is a good place to start. Visually stimulating through the hodgepodge of animation, news reels, and stock footage, the film starts with the question of human violence, moving quickly into the realization that our industrialized system is not sustainable and will come to an end. Author Nafeez Mosaddeq Ahmed systematically addresses each of the intertwined crises facing us due to our current methods of behavior. 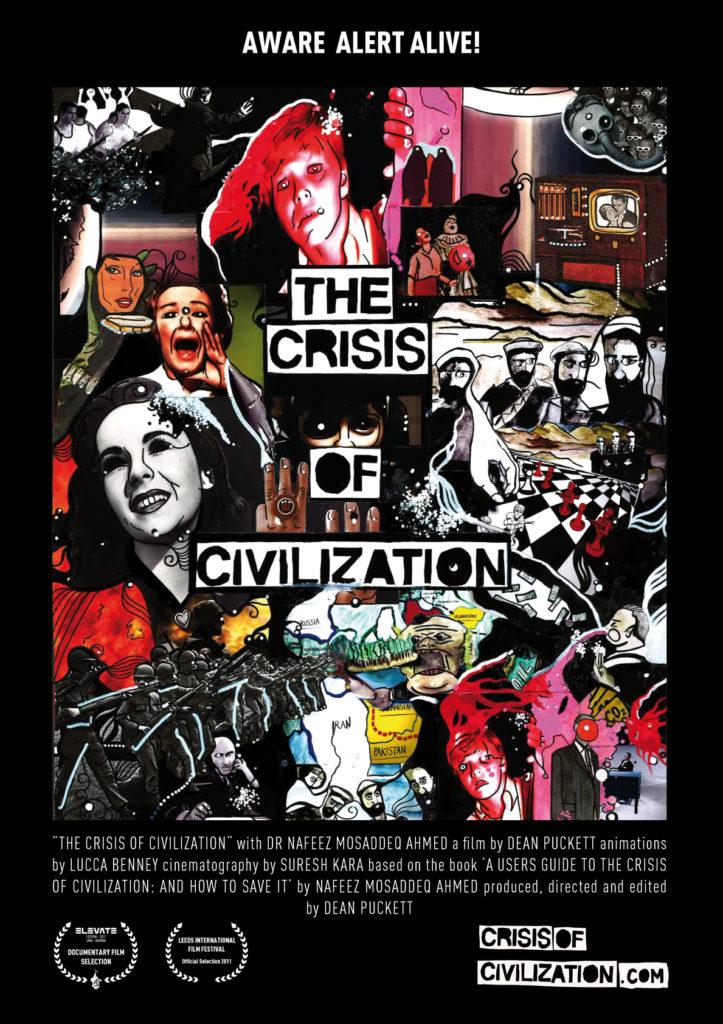 As climate change is first on the list, there is the obvious chance that people who want to ignore the dangers of that are quite unlikely to heed any of the other calls throughout the rest of the film. Yet Ahmed brazenly moves ahead, pointing out the profiteering that occurs through carbon trading, the oil and gas industry’s goal of minimizing concerns over climate change in order to increase profits, and the dangers of Peak Oil amid the ineffectiveness of fracking. Also demystifying the development of nuclear energy and its use of fossil fuels, he begins to make a case for renewable energy to address Peak Energy, but admits that even the collusion of wind, solar, and geothermal can’t provide enough energy to keep up our current pace.

The question we should be asking ourselves is why we would want to keep up this pace? Somehow we’ve forgotten that the grand promise of the Industrial Revolution was that we would work less, yet in America, generally dubbed as the most advanced country on the planet, we are working more hours than nearly every other country while simultaneously decreasing in overall well-being. As much as we may love to wave our work ethic in people’s faces, is all of this activity really necessary?

Because we have relied on industrial agriculture for so long, we have depleted the nutrients from our soil through mono-culture farming. Due to our methods of food distribution, we are also largely disconnected from our food, and for many of us, eat more food-type products than actual food. To combat Peak Food, Ahmed calls for a more participatory agricultural system including more local and community farms.

Based on the inequality of wealth and our dependence upon money created through fractional banking, we have developed an extraordinary level of economic instability. As we have begun using money as a commodity instead of merely as a means of exchange, we have created a financial bubble that makes all of the smaller warning bubbles we’ve seen with each depression and recession look like they’re floating in champagne. The ultimate result is that the bulk of the financial economy, comprised of mere digits in a computer, has been absorbed by a finite percentage of the population while the real economy is squeezed, making life much more difficult for the rest of us.

With the increased threat of terrorism, we have faced most of these crises with a growing militarization, but it does little to actually empower the people. Unfortunately, we have been numbed to many of these problems through our infatuation with consumerism. What is required of us now is to question what progress really means, and how we can be civilized as civilization crumbles around us.

Ahmed’s answer is to rethink the way money is created as well as recognizing the difference between using money as a commodity and using it as a currency. Should we be able to see beyond the silos we have created, there is hope in overcoming these crises. It will force us to question, and even stand against, many of our traditional ideas, yet moving forward into progress always necessitates leaving the old ways behind.

Are you hopeful that we can leave our old ways behind and live in a more equally prosperous way?