Tobacco sprouted up throughout Virginia, and became so influential that when the Virginia Colony’s General Assembly first met to establish a sort of self-governed representative legislation, the first law to pass was regarding the economics of the tobacco trade. Often called “country money,” tobacco was established as currency throughout Virginia, a role it would continue for the next 200 years. It was even used as payment for the wives that were shipped to the New World, with settlers paying 120 pounds of tobacco to have a mail order bride shipped over.

By 1639, tobacco was the chief export of the American colonies and Jamestown was shipping out 3,000,000 tons a year. Unfortunately, they soon discovered that monoculture wore out the soil every few years and they had to continue expanding their grow operations. Soon, the entire area was known as the “Tobacco Coast.”

Nevertheless, not everyone was so enthusiastic about this new plant and the rage that it caused. In 1603, it was banned in Japan, in 1612, its growth and use were banned in China, followed by Russia the following year. In Mongolia, the Emperor decreed that using tobacco was deserving of the death penalty, and by 1624, the Pope decreed that snuff users should be excommunicated from the Church since the sneezing that it caused was so close to orgasm.

Even in the New World, tobacco had its adversaries. In 1639, smoking was banned in New Amsterdam. In 1647, public smoking was banned in Connecticut, and private smoking was limited to once a day. Yet, regardless of whatever sanctions were put upon it or how severe the penalty for being caught using it, from decapitation to excommunication, those who used “the enchanted herb” once seemed to be unable to help wanting more of it, and tobacco quickly became the most vibrant economic engine in the New World, the penultimate cash crop.

In 1847, Phillip Morris started selling hand-rolled cigarettes in England, and purchasing from the girls who rolled them became quite popular. However in 1880, a 21-year-old Virginian named James Bonsack invented a cigarette rolling machine that could operate at thirteen times the speed of a cigarette girl, spitting out 120,000 cigarettes in ten hours. Although demand was high, it wasn’t that high, and most of the larger cigarette manufacturers passed on the machine. But a guy named James Buchanan “Buck” Duke had just inherited his dad’s tobacco company with his brother, saw some potential in the machine, and acquired the license for it.

Over the next few years, Duke invested largely in advertising, creating a market for the surplus of cigarettes he was producing. Although cigars, pipes, and chewing tobacco were more popular, cigarette use quadrupled, and Duke continued to push them by advertising them in magazines, giving them away at events, and pointing out how much more convenient and sanitary they were than other forms of tobacco. By 1890, Duke had 40% of the market and created the American Tobacco Company, urging his primary competitors to join with him, instantly absorbing 90% of the American tobacco market and establishing one of the first true American monopolies. When the monopoly was finally dismantled by the Supreme Court in 1911, 5 companies emerged just like the legendary hydra.

By the early 1900’s, 4 out of 5 American men smoked at least one cigar a day and 3.5 billion cigarettes were sold every year, helping tobacco to create 58 million dollars in federal tax revenue by 1910. Around this time, Phillip Morris set up shop in New York to give the American Tobacco Company some unhealthy competition, releasing a number of new brands, including a cigarette targeted toward women named Marlborough. Over the next several years, the war between tobacconists was a war of brands, as each company followed Duke’s lead, making their advertising campaigns just as important as the product itself. 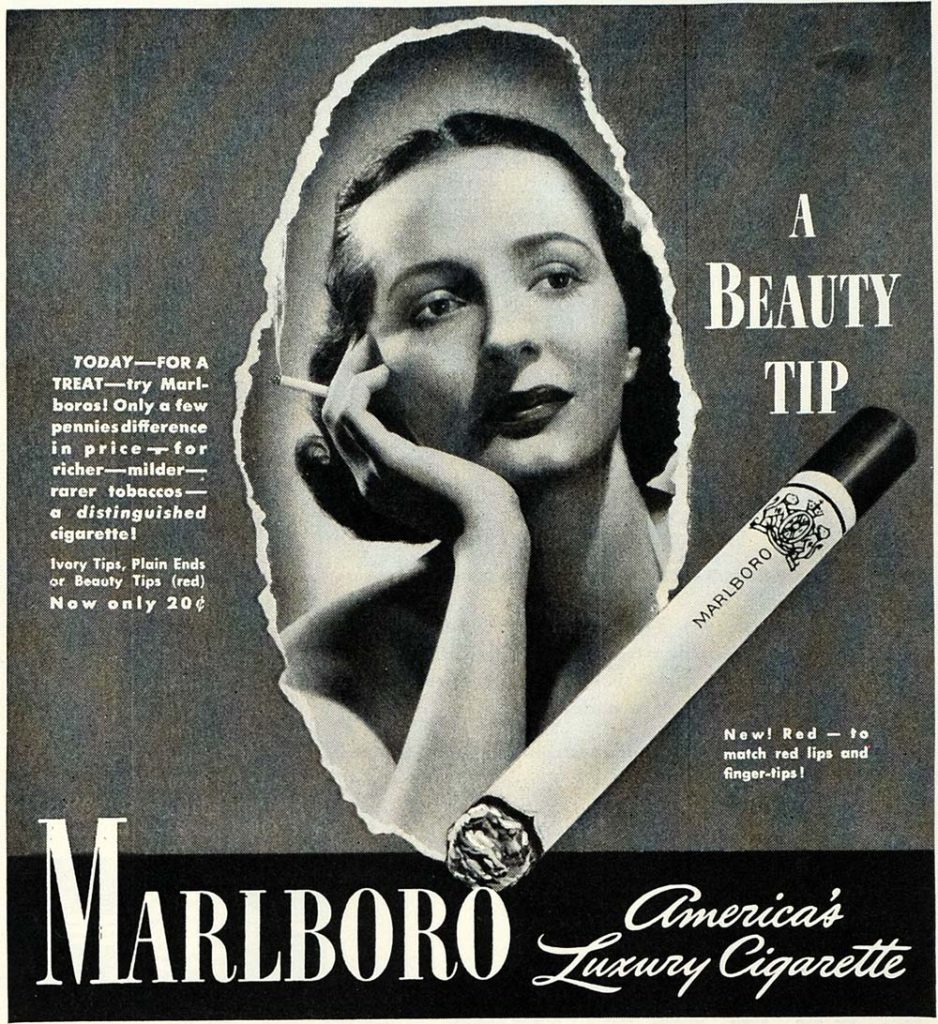 Despite the competition in the market, tobacco’s most fierce competitor has been the almost constant anti-tobacco contingent. Although it was largely rallied against for moral reasons more so than health reasons, especially given the phallic nature of cigarettes, cigars, and pipes, the health nuts have consistently raged on, regardless of how much they are ignored. When German scientists first made the link between lung cancer and cigarettes in 1939, even the Nazis were incapable of silencing the siren call of nicotine.

After becoming a two-pack-a-day-smoker in his twenties, Adolf Hitler was not too big a fan of the paper tobacco tubes, calling them “the wrath of the Red Man against the White Man, vengeance for having been given hard liquor.” Just as he pushed a vendetta on the Jewish people, which some of his ancestors were, his self-loathing for becoming a tobacco addict compelled him to ban smoking in the Nazi offices, trains and bunkers, while launching the first public anti-tobacco campaign, educating Germans on the health risks and blaming the entire predicament on Blacks, Hispanics, Gypsies, and Jews. Yet despite the movement, including the restrictions on advertising, people still wanted their smokes, and tobacco use continued to rise throughout the Third Reich and beyond.

No marketing campaign was quite as effective at getting people to smoke as Marlboro. Trying to make smoking more acceptable for women, especially in America, the “-ugh” was dropped from the spelling, and the additional filter was marked by a red band to help hide lipstick marks throughout the Roaring Twenties. However, in the 1950’s when a number of reports began linking cigarette smoking to lung cancer, Marlboro took a decidedly different turn.

Not wanting to give up the ability to make money just because people were scared of a little lung cancer, Phillip Morris decided to appeal to the men who were feeling wary about continuing to smoke in light of these potential hazards. Although filtered cigarettes had been associated with women in order to get them smoking in the first place, Marlboro was re-branded as a man’s cigarette, with a marketing campaign that featured the re-designed, filtered cigarette between the lips of a rugged cowboy who would soon come to be known as the Marlboro Man. Within a year, Marlboro became the 4th most popular brand of cigarette, and it would go on to become arguably, the most popular brand in the world. 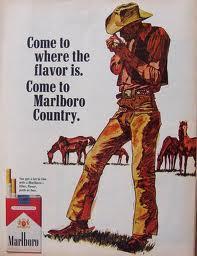 Although Phillip Morris seemed to have effectively dodged the bullet, the rest of the tobacco industry was facing mounting allegations as their products were linked to lung cancer and smokers began to file lawsuits. In 1953, the American Tobacco Company called together the CEO’s of the other leading tobacco manufacturers, and they set up the Tobacco Industry Research Committee, basically a public relations company that paid ethically-challenged professionals to proclaim that unless every single case of lung cancer in the history of man could be incontrovertibly linked to tobacco smoke as a definite cause, then there was no proof whatsoever that tobacco caused lung cancer. The aversion techniques worked for over thirty years until 1998, when each of the 50 states sued the 4 largest tobacco companies for giving cancer to their citizens, and the ensuing Master Settlement Agreement finally brought the Tobacco Industry Research Committee, by then called the Council for Tobacco Research, to an end.

When the TIRC began, almost half of the American population smoked. In spite of, or due to, tobacco’s connection to lung cancer, by the 1970’s, cigarettes were the most heavily advertised product in America. And although only 17.8% of the population smokes now,24 and although cigarettes are banned from advertising on television or radio, the tobacco industry still spends almost 10 billion dollars a year, or 1 million dollars an hour, in advertising in order to create 35 billion dollars in annual profits for the country’s 6 top tobacco companies.25

Since its introduction to the “civilized” world over 500 years ago, it is estimated that tobacco use has been the direct cause for 1 billion deaths worldwide. Yet due to its salient ability to truly harness a market, and perhaps because it truly was the foundation for the American economy and the genesis for its birth, the tobacco industry is continually coddled by the federal government and promoted as one of the most highly profitable products in the world. Indeed, when the state is making over 25 billion dollars in taxes and settlements a year, it is understandable that the entity spends less than half a billion dollars on smoking prevention or cessation programs.

The story of tobacco is a microcosm of the human infatuation with money. They are both stories of addiction to a substance that provides a surge of power, and though it may ultimately impart negative consequences, its ability to provide a creature comfort in the here and now often triumphs over the possible ramifications that may or may not manifest in the future. Beyond all reason and common sense, for those who are addicted to tobacco, there is no sacrifice too great for the ability to drink the smoke, and for those who are addicted to money, nothing is more important than playing and winning the game.