Earlier this year, I took part in the Sarasolo Festival’s workshop to develop a one-person show. The concept for “The Cowboy Cabaret” had been rolling around in my head for awhile, and throughout the Spring I performed stripped down versions of it at The Starlite Room and The Gator Club. But it wasn’t until a few weeks ago, after I finished another draft of Money, Sex, Power & Faith and could let it simmer for a few months, when I started writing what I call “the in-betweens” for the songs featured in the show. 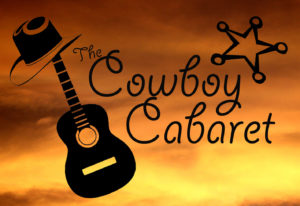 The Cowboy Cabaret is structured as a sort of human jukebox, and with the first four shows attendees could select from roughly seventy different cards, each with a different song on it. I would then, say a little something about the song, and then perform the song. However, I felt that the “little something” was generally too little. I felt that, although I and my audience enjoyed the versatility of the performance and the improvised banter it produced, the show still needed a stronger narrative to allow me a bit more grounding and let me tie things together.

Although I had seen the mythology behind the show in my head, I hadn’t drafted it in a way I could quite communicate, and I felt that would be communicated through the “in-betweens”, so once I could clear my head of money, sex, power, and faith, I started working on them.

Understanding the show will always be a work in progress and may never reach an absolutely finished state, I wrote about thirteen of these little segments before the last one rhymed, and I was reminded that I am a poet. Over the course of the following four days, I wrote forty-two more poems inspired by the songs on the cards.

My task now is to memorize them and rehearse this Cowboy character until he tells me his name. In the meantime, I’ll begin sharing them here. While a fifteen minute version of The Cowboy Cabaret will be featured at the Sarasolo Festival in early 2017, my intention is to start performing it in the area over the course of the next few months.

Until then, this is the way I’m thinking of starting the show…

Welcome, ladies and gentlemen, I’m glad you could make it tonight
Come on up a little closer, I promise I won’t bite
For you I’d like to play some songs, and maybe tell some stories
I’ll try not to go on too long, I won’t go late, now don’t you worry
The songs I wanna share with you, they got something to say
This here ain’t a normal show, it’s the Cowboy Cabaret
You’re likely to laugh and poss’bly to think, and I hope you like my style
but even if you think I stink, I hope I at least make you smile

Follow me on Facebook or come back here to keep informed about performance dates and more of the “in-betweens” as The Cowboy Cabaret continues to grow.