“The Reformer is always right about what’s wrong. However, he’s often wrong about what is right.” – G.K. Chesterton

At the time, no one was more into fortune and glory than the Roman Catholic Church. One of the guiding principals of the papacy was that God must be worshiped through the accumulation of ornate and shiny things, so every cathedral built seemed to be in a contest to outdo the last in terms of extravagance and grandeur. Pope Leo X’s latest pet project, the most enormous building possible in which he could be buried near the likely remains of St. Peter, needed to be funded, so the Pope started thinking a little outside the box on ways to economize his papal powers.

The idea was to sell “indulgences.” This would basically allow people to purchase forgiveness for their sins, at least some sort of remediation from them. The Pope’s mistake was sending fundraisers to Germany, because once a friar named Martin Luther got wind of it, he caused a bit of a ruckus. When Luther noticed the attendance of his parishioners dropping, he grew more vocal over how he felt about the papacy selling what only God supposedly had to give. 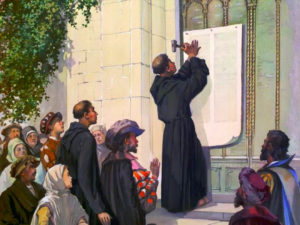 Of course, indulgences weren’t Luther’s only problems with the Roman Catholic Church. The overall authority of the Pope, the devotion to Mary, celibacy for clergy, and the reliance upon saints and priests in order for people to commune with God were also issues that he would address when he nailed the 95 Thesis to the door of the Castle Church in Wittenberg. In addition, considering the advent of the printing press, Luther wanted more people to have access to the scriptures, which the Church wanted to keep close to their chest.

Although Luther’s initial intentions were to create reforms in the Church to make it more user friendly, he was ostracized from Catholicism and somewhat forced into the leadership of Protestantism, creating a schism in the Christian church. Using the technology of the printing press, Luther’s writings were shared much more than the Roman Catholic Church’s, who resolved to hold on to their power by keeping parishioners ignorant, and the Protestant movement grew. Luther also printed a German version of the Bible, making the scriptures even more accessible to the average layperson.

Contrary to the Roman Catholic Church’s history of developing the most ornate centers of worship, Luther guided the Protestant movement toward more humble gathering places, devoid of the gold and other materialistic trappings he saw in the papacy. Protestant churches would eventually come to re-embrace the grandeur of decorative places of worship, as is evidenced today by the plethora of churches with stained glass and multi-million dollar megachurches with state-of-the-art media systems, but a large part of the initial movement was merely to keep it simple and connect with God where you could.

A few years later, Henry the VIII would have a similar beef with the Roman Catholic Church, and in 1534, he started the dissolution of the monasteries, liquidating the properties owned by the Church in order to fund his wars. This movement was monumental because it set up the English King as the leader of the newly formed Church of England, severing ties to the papacy. This caused a rash of European leaders to follow suit, claiming monastic properties for the state, and largely crippling the Roman Catholic Church.