“When tillage begins, other arts follow. The farmers therefore are the founders of human civilization.” – Daniel Webster

Before 9,000 BC, from what we gather, there was no use of money. People were largely nomadic and egalitarian in their lifestyles. Because humans lived more closely with Nature, other than fossilized bones, there is very little trace we have lived for as long as we have. As hunters and gatherers, and even as we moved toward a more stable, agrarian lifestyle, it seems we very much adhered to the “leave no trace” mentality. 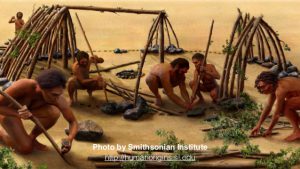 As Christopher Ryan and Cacilda Jethá wrote in Sex At Dawn, “We know that the foraging societies in which human beings evolved were small-scale, highly egalitarian groups who shared almost everything. There is a remarkable consistency to how immediate return foragers live – wherever they are. The !Kung San of Botswana have a great deal in common with Aboriginal people living in outback Australia and tribes in remote pockets of the Amazon rain forest. Anthropologists have demonstrated time and again that immediate-return hunter-gatherer societies are nearly universal in their fierce egalitarianism. Sharing is not just encouraged; it’s mandatory. Hoarding or hiding food, for example, is considered deeply shameful, almost unforgivable behavior in these societies.

“Foragers divide and distribute meat equitably,” Jethá and Ryan continue, “breastfeed one another’s babies, have little or no privacy from one another, and depend upon each other for survival. As much as our social world revolves around notions of private property and individual responsibility, theirs spins in the opposite direction, toward group welfare, group identity, profound interrelation, and mutual dependence.”

Because early humans were nomadic, personal belongings were kept to a minimum, and a sharing economy inspired tribes to watch out for one another. It is also believed, before settling into the ideas of property ownership agriculture inspired, humans were much more open in their sexuality, with each member of the tribe having a variety of sexual partners. Due to the interdependent structure of these early tribes, the polyamory practiced was deficient of the paternal inclination, which arose as humankind started to taste the power of dominion. Before this time, the actual fatherhood of a child was unimportant, as each child was everyone’s child.

Since the written word didn’t come into play until about 3,100 BC, the roughly 197,000 years before this time are affectionately referred to as “prehistory.” Although we began painting on cave walls at about 38,000 BC, without the written word, there was no record of government, state, religion or property, all the key ingredients it takes to create culture, the featured star in our writing of history.

Yet we have found evidence of tools and music throughout this period. As humans shifted from our nomadic lifestyles, living within the confines of Nature’s bounty, to sedentary agrarianism, we first started to manipulate the food bearing plants around us, and set up a more cohesive tribal system. Thriving for millennia under the sharing economy, the recovered art of this era before the written word tells the story of a species highly in awe of the feminine virtues and with no record of war.

Beyond the cave paintings, the earliest known pieces of art are of various female forms. With much emphasis on the breasts and belly, it is widely accepted  throughout this Paleolithic era, and into the Neolithic which followed, the female’s ability to create life from the womb merited much greater respect from the human species, resulting in a more maternalistic worldview than what has since developed through the inherent paternalism of the Judeo/Christian/Islamic traditions. As God has been the Father all these many years, Nature has been our Mother, and while the hope for this book is to help us move beyond the dichotomy of sexism, for the duration of it, I’ll be referring to Nature as a She, just to balance things out a bit and help the ball to get rolling in that general direction.

“The Goddess-centered art we have been examining,” writes Riane Eisler in The Chalice and the Blade: Our History, Our Future, “with its striking absence of images of male domination or warfare, seems to have reflected a social order in which women, first as heads of clans and priestesses and later on in other important roles, played a central part, and in which both men and women worked together in equal partnership for the common good.”

However, this is not to say Mother Nature completely ruled the day. As Ken Wilber pointed out in A Brief History of Everything, “Matriarchal strictly means mother-ruled or mother-dominant, and there have never been any strictly matriarchal societies. Rather, these societies were more ‘equalitarian,’ with roughly equal status between men and women; and many such societies did indeed trace ancestry through the mother, and in other ways have a ‘matrifocal’ arrangement… about one-third of the these societies had female-only deities, particularly the Great Mother in her various guises, and conversely, virtually every known Great Mother society is horticultural. Almost any place you see the Great Mother religion, you know there is a horticultural background. This began roughly around 10,000 BCE, in both the East and West.”

Basically, it seems as we adhered to Mother Nature, we lived in relative harmony with her, but since the Goddess became God, we’ve implemented quite a few new destructive tools and toys.