“For the execution of the voyage to the Indies, I did not make use of intelligence, mathematics or maps.” – Christopher Columbus

From 1438 to 1533, before Columbus blazed the trail leading to what would become South America, the Incas established 14,000 miles of roads to connect the housing, public buildings, and palaces they built throughout what is now Peru, Ecuador, Bolivia, Chile, and Columbia. Although their neighbors, the Aztecs and Mayans, used beans, fabric, and other products for trading, the Incas developed a system of state-sponsored egalitarianism known as the “Mit’a.” To keep things simple, and accomplish what needed to be accomplished, Incan males would provide labor for about two thirds of the year starting at the age of fifteen. For their service, the government provided the basics of life, including food, clothing, shelter, tools, healthcare, and whatever else they might need.

While the Incas were living the easy life, across the seas, others were looking to expand their territories, and explorers set out from Europe in search of new worlds. In 1492, the Incas’ neighbors to the north would be the first to meet one of these explorers as Christopher Columbus set out on his misguided expedition, financed by Ferdinand and Isabella of Spain. Although he is often given credit for discovering America, Columbus only made it as far as Jamaica, the Bahamas, Haiti, Cuba, and the Dominican Republic, where he set up work camps to dig for gold and gathered the natives as slaves. 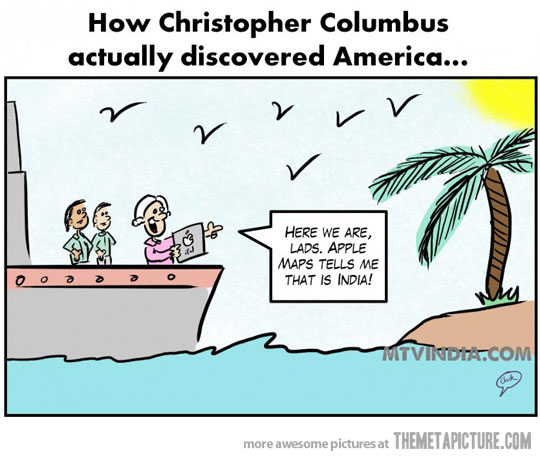 According to Howard Zinn’s account of Columbus’ expedition in A People’s History of the United States, Columbus remarked on the sharing economy practiced by the tribes before he proceeded to enslave them, take their gold, and apparently kill a good number of them. In his journal, Columbus regarded the natives as “so naive and so free with their possessions that no one who has not witnessed them would believe it. When you ask for something they have, they never say no. To the contrary, they offer to share with anyone.”

Columbus would also go on to remark about how, although the slaves were “naked as the day they were born,” they showed “no more embarrassment than animals.” Zinn goes on to cite Bartolome de las Casas, a young priest who transcribed Columbus’ journals, as he became extremely critical of the Spaniards’ brutality, in his several volumes on the history of the West Indies. His description of the native people and the esteem in which they held their women, lends a lot of credence to the theory that primitive humans were polyamorous and sexually egalitarian.

“Marriage laws are non-existent,” las Casas stated, “men and women alike choose their mates and leave them as they please, without offense, jealousy or anger. They multiply in great abundance; pregnant women work to the last minute and give birth almost painlessly; up the next day, they bathe in the river and are as clean and healthy as before giving birth. If they tire of their men, they give themselves abortions with herbs that force stillbirths, covering their shameful parts with leaves or cotton cloth; although on the whole, Indian men and women look upon total nakedness with as much casualness as we look upon a man’s head or at his hands.”

At the time that the Spaniards started sending explorers to what Columbus mistakenly referred to as the West Indies, the Spanish empire was comprised mostly of peasants who worked for the nobility. According to Zinn, 2% of the population owned 95% of the land, which makes it more understandable as to how the New World they started has now reached a point where 1% population owns 70% of the wealth. Because gold had become such a versatile commodity, and since they already owned most of the land in the region, the Spaniards sought to expand on their wealth through the accumulation of more gold.

The natives, Las Casas says, “put no value on gold and other precious things. They lack all manner of commerce, neither buying nor selling, and rely exclusively on their natural environment for maintenance. They are extremely generous with their possessions and by the same token covet the possessions of their friends and expect the same degree of liberality.”

Las Casas also reported of occasional battles between native tribes, but their forces were no match for the Spaniards. Given the title “Admiral of the Sea” by Isabelle, who reportedly never thought he’d return, Columbus was also given the title of “Viceroy and Governor” over the New World after his first trip, and it would seem that the power went to his head. Although he has been heralded as a hero in textbooks and a national holiday was established to honor his name in 1937, more recent studies have shown Columbus to have had as maniacal a thirst for genocide as Hitler, with over a million natives dying by Spanish sword, brutal working conditions, or other measures of cruelty.

Shortly before signing off on Columbus’ first voyage, Ferdinand and Isabella had already instituted the Spanish Inquisition, forcing all resident Jews and Moors to convert to the Roman Catholic religion or leave. Incorporating a variety of cruel tactics from prison and torture to execution, it seems that the Spanish nobility may have set up a template for Columbus and the rest of the Spanish explorers that would follow in his tracks on how to treat people that disagreed with them, or those who stood in the way of their economic advances. Thus, natives were viewed as little more than disposable slave labor sitting on a fortune in untouched gold, or a good price as marketable slaves.

Because this new expansion was being headed up by Spain under the guise of the Roman Catholic Church, only Castilians and Catholics were allowed to go to the New World, inspiring a number of non-Castilians, like Italian Alberico Vespucio, to change their names to incorporate a more Latino flair, like Amerigo Vespucci, in order to get in on the fun. Vespucci had previously taken over his father’s banking business and become the business manager for the Medici family, turning in great profits for the most powerful family in Florence. Visiting Spain on business with money to spare, Vespucci realized the economic potential of the New World that Columbus had discovered, and wanted in. Not much of a sailor at the time, he partnered up with a captain that had gone on Columbus’ second voyage, Alonso de Ojeda, and they set out to seek their own fortune and glory.

Leaving Spain in 1499 for what Columbus had thought were merely islands really far off the coast of Asia, Vespucci sailed on by Columbus’ little operation and ran into what would later be called South America, as if to say, “Yo, Chris! You missed something.” They managed to find a little bit of gold and some gemstones on their first expedition as Vespucci learned how to sail, and they swung by the Bahamas on their return to Spain to snatch up 200 or so slaves, so as not to return empty handed. Vespucci took one more trip to explore the area now known as Brazil, but like Columbus, Vespucci never set foot on North American soil.