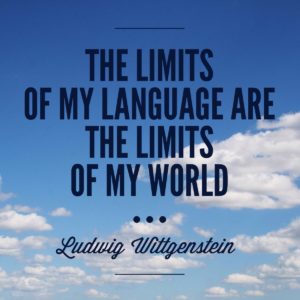 I’m having a bit of a challenge talking about the problems of the world and, more importantly, how we move beyond them. Part of the challenge is the limitation of our language. I generally interact with much of the world digitally through the Facebook platform, as does 53% of my fellow Americans, and since we seem to be a fairly accurate representation of the American population, I’m often dismayed by the limitations of our vocabulary.

Granted, this is a time when a good portion of the population is either angry about the state of our republic, or angry at other people for being angry at the state of our republic. Since anger rarely breeds intelligence, a good majority of our political conversations descend into the simple classifications of people as of liberal versus conservative, for those who need to fit their world view into a smaller box, Democrats and Republicans.

Fortunately, there are those who can see past the ruse of the classifications, recognizing the multiple definitions of both “liberal” and “conservative” to be sorely lacking in their ability to truly define the complexity of a human being and the utter absurdity in operating a melting pot democracy with a system consisting of only two equally imbalanced sides. I’m hoping that those who can see outside the boundaries of the rhetoric we’ve been given to squabble over might be open to the idea that the modality of our salvation may just not have been invented yet.

In America, we tend to be all gung ho for capitalism. However, there are a variety of gradations to this particular ideology ranging from the simple “I have something of value that I can trade” to the global control of those whose families have managed to accrue the most money during our obsession with this particular ideology. Unfortunately, capitalism essentially draws on the concept of every person being their own individual island and doesn’t quite encompass the human needs of connection and community outside the monetary system.

Of course, any ideology in America that supports the development of community and a better means of sharing resources is quickly dismissed as communism. Unfortunately, this ideology was very poorly administered by countries like Russia, China, and Cuba by instituting the use of violent force through the military, and though the historical implementations of communism have been a far cry from the actual ideology of The Communist Manifesto, after two different “Red Scares,” where communism was painted as the antithesis of all things American, just the mention of communism puts most Americans into a panic.

Socialism seems to be working well in a number of other countries to varying degrees, but the independent streak instilled in Americans make them reluctant to accept the idea of higher income taxes. Although many are still somehow ambivalent about tax cuts for the wealthy to supporty their lavish lifestyles while the lower and middle classes work harder to cover the basic necessities of the many a good number of Americans recognize that socialism has also often been administered poorly, and it’s better to stick with the devil of capitalism you know than to entertain any other devilishly misunderstood -isms.

As many watch the current presidential administration point out the absurdity inherent in a number of our cherished practices and theatrics of democracy, quite a few people are opening up to existence beyond the -isms and gearing up for downright anarchy. Again, this word has many meanings. To some, it means chaos and a lack of order, and to others, it means having the freedom to rule one’s self and manage human relations without the need for an overarching government or any of the -isms humanity has instituted in order to carry out our obsession with finding a perfect system.

It very well could be that the answer we are looking for is beyond the limitations of capitalism, communism, socialism, and anarchy. It is certainly beyond the willfully ignorant descriptions of people as merely liberal or conservative. How do we start to have a conversation that there are no words for?

I think I’m going to start my search here.