A friend I know who I thought would never quit smoking recently has, but he says he didn’t quit, he simply became a non-smoker. His strong-willed work ethic wouldn’t allow him to become a quitter, so he just became something else. Whenever a craving would rise, he would remind himself that smoking is not something he did, and then he moved on to do something more productive and fun.

I hate quitting things myself, and as an optimist, I’m not to fond of defining myself in the negative. I don’t really want to be a “non” anything. I want a positive way to describe something I don’t do, and I’m sure there are plenty of other people out their who have rationalized their addictions in the same manner.

Yet, to become a non-smoker still places smoking as some sort of intrinsic part of my life, as if my existence is somehow defined by what I don’t do. Although I have involved this activity in my life on a near daily basis for almost half of my time here on earth, I feel that the other things I’ve done in the meantime have had much more merit. I would much prefer to define myself by what I do, and not what I don’t do.

So I went to the roots of what people did before tobacco was discovered by capitalists and made the foundation of the American economy. I discovered that we breathed. Instead of calling myself a Quitter or a Non-smoker, I am a Breather. 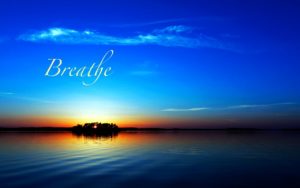 A single breath can be quit empowering, encompassing a complete meditation and chakra alignment in a single full breath if it’s done properly. Breathing is the foundation of yoga, meditation, tai chi, and a number of other life-fulfilling activities. Other than the earth suit it allows us to operate, our breath is the first gift we are given when we start our human experience and the purest form of connection with the divine. Breath is purifying, life-giving, grounding, centering, fulfilling, and a much better choice than drawing in the smoldering embers of carcinogens and toxins.

The great thing about breathing is that we don’t even have to work for it. It just happens whether or not we’re even aware of it. Yet when we are conscious of it, when we really focus on what is happening through this process of filling us with life, the activity is quite extraordinary.

If you’re currently a smoker, try to just be a breather. Instead of going outside for those dozen or so drags on a tube of tobacco, take 12 full breaths, feeling each one go in through your nose, filling your lungs on its way around your body, up your back, and out through your mouth. The more I do it, the less I want to ingest anything that’s going to weaken me and detract from the purity of my breath.

Give it a try and discover if breathing can work for you.

Although yesterday was my birthday, to promote my new status as a Breather, I have a gift for you today. “Sweet Leaf Serenade” is a bittersweet love song I wrote to tobacco as I move into the next chapter of my life and leave my relationship with this plant behind. Huge thanks to Wayne and Eugene from Jumpdog Studios for being such incredible producers, and enormous thanks to Sara Stovall for contributing her fiddle and making this song what it is.