Will Rogers Revived is a one-person show performed by Steve McAllister based on the writings and legacy of Will Rogers. The performance offers audiences the opportunity to laugh at America’s political system and includes a hopeful message of kindness and understanding from the words of one of America’s greatest humorists. 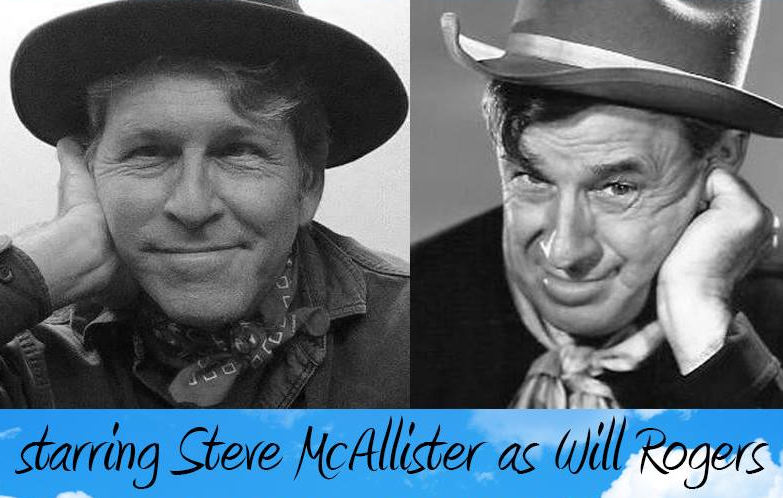 Premiered at the 2018 Sarasolo Festival, Will Rogers Revived is a delightful experience for audiences of any size and a catalyst for community conversations, appropriate for businesses, community/neighborhood associations, churches, schools, in-home performances, and other performance venues.

McAllister first performed the role of Will Rogers in The Will Rogers Follies at The Players Centre for Performing Arts in Sarasota, Florida. Reviewer Marty Fugate of The Observer stated that, “McAllister has enough of his own charisma to carry the whole show,” which prompted the actor to further develop a one-person performance in which he showcases more of what Rogers had to say.

During this life, between 1879 and 1935, these are some of the things that Will Rogers had to say, all of them, among others, included in a performance of Will Rogers Revived…

All I know is just what I read in the papers. I’ve often said that’s an alibi for my ignorance.

Everything is changing. People are taking their comedians seriously and the politicians as a joke.

In my day, we said, ‘Things can’t go on like this’, and they didn’t, they got worse.

If America ever passes out as a great nation, we ought to put on our tombstone: America died from a delusion she had Moral Leadership.

In politics, practically everything you hear is scandal, and besides, the funny thing is that the things they are whispering ain’t half has bad as the things they have been saying right out loud.

The truth is, there are men running governments who shouldn’t be allowed to play with matches.

The short memories of the American voters is what keeps our politicians in office.

About all I can say for the United States Senate is that it opens with a prayer and closes with an investigation.

I’ve come to believe that the US is safest when Congress is in recess. This country has come to feel the same when Congress is in session as when the baby gets hold of a hammer. It’s just a question of how much damage he can do with it before we can take it away from him.

If we took Congress seriously, we would be worrying all the time.

It costs ten times more to govern us than it used to, and we are not governed one-tenth as good.

We cuss Congress, and we joke about ’em, but they are all good fellas at heart, and if they wasn’t in Congress, why, they would be doing something else against us that might be even worse.

I tell you folks, all politics is applesauce.

We have plenty of confidence in this country, but we are a little short of good men to place our confidence in.

One of the evils of democracy is, you have to put up with the people you elect whether you want them or not.

Times have proven only one thing, and that is you can’t ruin this country, even with politics.

That we have carried as much political bunk as we have and still survived shows we are a super nation.

Things in our country run in spite of politics, not by aid of it.

You’ve got to inject humor into politics. If you ever injected truth into it, you’d have no politics.

The more you observe politics, the more you’ve got to admit that each party is worse than the other. They are each good when they are out, and each bad when they are in. There’s no way in the world you’re going to make a political party respectable unless you keep it out of office.

I think it’s fair to say that if all politicians fished instead of spoke publicly, we would be at peace with the world.

Personally, I am not a member of any organized political party. I am a Democrat.

Democrats never agree on anything, that’s why they’re Democrats. If they agreed with each other, they would be Republicans.

But ultimately, Democrats are the only reason to vote for Republicans.

That’s one thing about Republican Presidents. They never went in much for plans. They only had one plan. It says “Boys, my head is turned. Just get it while you can.”

Under capitalism man exploits man, see; under socialism, the reverse is true.

Money and women are the most sought after and the least known about of any two things we have.

If Wall Street paid a tax on every “game” they run, we would get enough revenue to run the government on.

Too many people spend money they haven’t earned to buy things they don’t want to impress people they don’t like.

I doubt if there is a thing in the world as wrong or unreliable as history. History ain’t what it is, it’s what some writer wanted it to be, and ours is just as cockeyed as the rest.

A person only learns in two ways, one by reading, and the other by association with smarter people.

The truth is that everybody is ignorant, only on different subjects.

There is nothing so stupid as the educated man if you get him off the thing he was educated in.

There are three kinds of student. The one that learns by reading. The few who learn by observation. The rest of them have to pee on the electric fence for themselves.

If a man ain’t nothin’ else, then he’s an artist. It’s the only thing he can claim to be that nobody can prove he ain’t.

My Indian ancestors used to say that You can’t tell what a man is like or what he is thinking when you are looking at him. You must get around behind him and see what he has been looking at. When you meet people, no matter what opinion you might have formed about them beforehand, why, after you meet them and see their angle and their personality, why, you can see a lot of good in all of them.

We will never have true civilization until we have learned to recognize the rights of others.

The show can be customized for each particular audience to fit time constraints, and can also be coupled and expanded with The Cowboy Cabaret, an interactive presentation of poetry and music also performed by Steve McAllister. Watch below to see how the two shows developed.